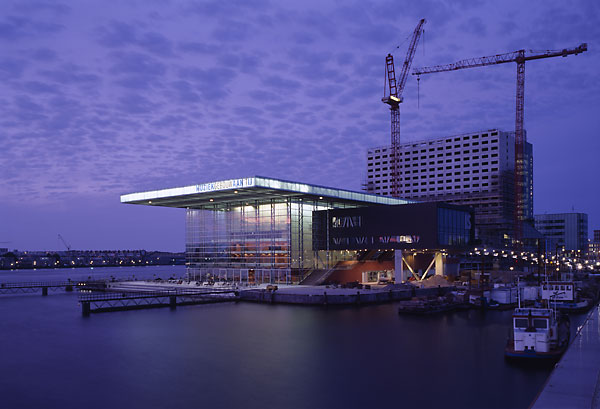 Amsterdam is an old city, rich in history and culture. It is one of those places you visit and then want to live in; it is also considered one of the best walking cities in the world. A stroll through the city will reveal modernized interiors glimpsed through the un-curtained windows of the 17th century canal houses. Because of the canals, Amsterdam is often compared to Venice. But while Venice is firmly rooted in it’s Old World architecture and museum-like atmosphere, Amsterdam has been experiencing a rebirth through innovation and modern architecture.

After a brief modernist movement in the early 1900s, the city became satisfied with the status quo and fell into an architectural coma. In 1977, the last of the shipping companies moved their operations from the eastern docks leaving the man-made peninsula open for development. The residential development of the eastern docklands was considered an aesthetic undertaking rather than a financial one and the island communities of KNSM, Java and Borneo Sporenburg, comprising the Havens Oost district, was born with an emphasis on innovative design.

Nearly every architect in the city was called upon to design a part of Havens Oost with most of the master planning being done by the Dutch firm, West 8. The emphasis of the master plan was urban density. In order to make the area more attractive to families, the plan called for a 30-50 percent void around which each home was built, thus giving the residents their own private space while maintaining density.

Breaking up the terraced houses, large sculptural blocks of apartments offer spectacular views over the city and give urban presence and scale to the development. They offer metropolitan apartment living in contrast to the family-oriented patio houses on the street, creating a mixed community of ages and social habits.

The most notable is The Whale, named because of its squat stature and the fact it is roughly the size of a football field. It is only one of three large-scale apartments in the area and is also distinctive because of the angled roof elevating the building on two sides to maximize sunlight to the apartments.

To the south of KNSM island, the southern banks of the IJ are currently going through redevelopment creating a meeting point between the historic heart of the city and the progressive eastern docklands.

The Muziekgebouw aan ‘t IJ is at the forefront of this resurgence. The state-of-the-art concert hall was conceived as a place for classical performances, but the scope has expanded to include festivals, thematic projects, multimedia concerts and special series creating ties with other styles, cultures and art forms.

Designed by Danish architectural firm, 3XN Architects (3xn.com), Muziekgebouw is a versatile space with breathtaking views of the water and city from various places in the building. The concert hall has a moveable ceiling and walls to create a space for intimate enough for chamber music or large enough for a full symphony. The predominantly square building has unexpected diagonal elements and a spectacular view along two auditoriums behind a glass façade.

Any architecture tour of Amsterdam should start with a visit to ARCAM, the home of the Amsterdam Centre for Architecture. It was built as a public information venue with talks, lectures and exhibits about local architecture. There, you can be guided to the Archishuttle, a bus route with stops along architectural interest points.

Just up the street from ARCAM sits NEMO, a structure housing the Amsterdam Science Centre designed by Renzo Piano.

No visit to the city would be complete without visiting the many historic centers and museums. Some of the highlights include the Rijksmuseum, Rembrandt House and the Anne Frank House. For a more contemporary turn, the Stedelijk Museum and FOAM Photography Museum offer modern forms of expression.

Much like the Rembrandt and Anne Frank Houses, a visit to the Van Gogh Museum is a must when visiting the city. The museum houses almost a quarter of Van Gogh’s work along with many of his contemporaries. The newer exhibition wing of the museum was completed in 1999. The daunting task of adding on to this beloved museum was entrusted to Japanese architect, Kisho Kurokawa, whose creation surpassed the popularity of the main museum.

No longer satisfied with the status quo, Amsterdam is looking to innovate. The Living Tomorrow Pavilion is a showcase for living concepts and technologies of the future. Architects, Ben van Berkel and Caroline Bos, of UN Studio marry the practical and the theoretical in a structure that could be envisioned on the surface of the moon.

Another UN Studio project underway is the Groninger Forum. This futuristic building is “designed to fit seamlessly into its surroundings, whilst offering a new prototype for interdisciplinary relationships”. The building will be home to a museum, library, cinema and archive. The Forum will collaborate on events and create meeting places for visitors with a café, restaurant, bookstore, roof terrace and a sky lounge.

Amsterdam is a city aware of its history and its architecture. No longer willing to live in the past, Dutch architecture is among the most exciting and innovative in Europe. A trip to Amsterdam and nearby Rotterdam will uncover many architectural surprises and instill respect for this tolerant and forward thinking culture.