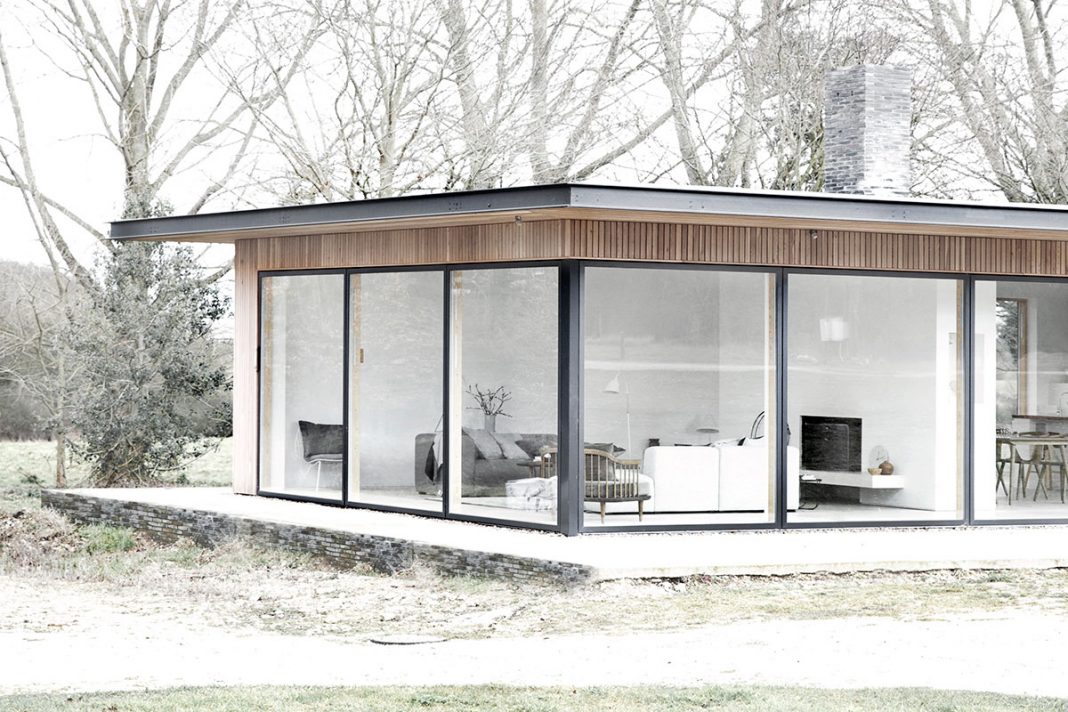 It doesn’t look like a typical farmhouse. But, it’s on a farm… and it’s a house, so…

It might be too grandiose to say that Danish design firm, Norm Architects is redefining what a farmhouse looks like. But when you consider Reydon Grove Farm in Suffolk, England, maybe it’s not overstating the point at all. 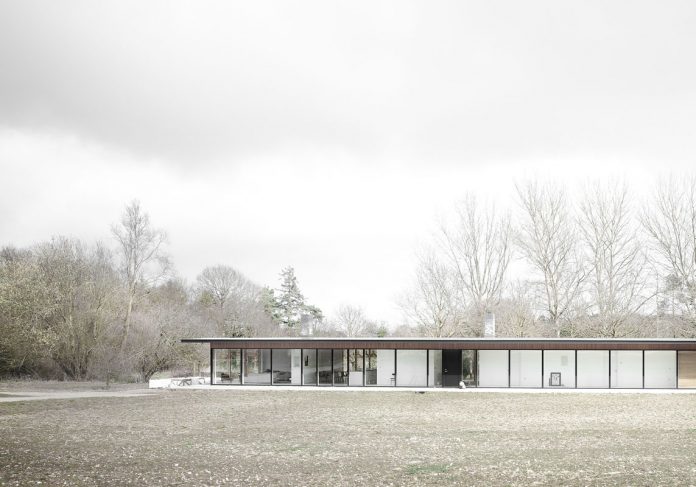 The farmhouse is designed more like a pavilion than the gabled ones we’re used to seeing. It is long and narrow with a large overhanging roof that gives the building an overall scale to compete with the existing barn and the old dairies. The length of the structure also acts as a transition point from the meadowlands to the cultivated farmland and enclosed garden. The house is lifted slightly on an elevated plateau providing for views of the garden and the fields on the horizon. 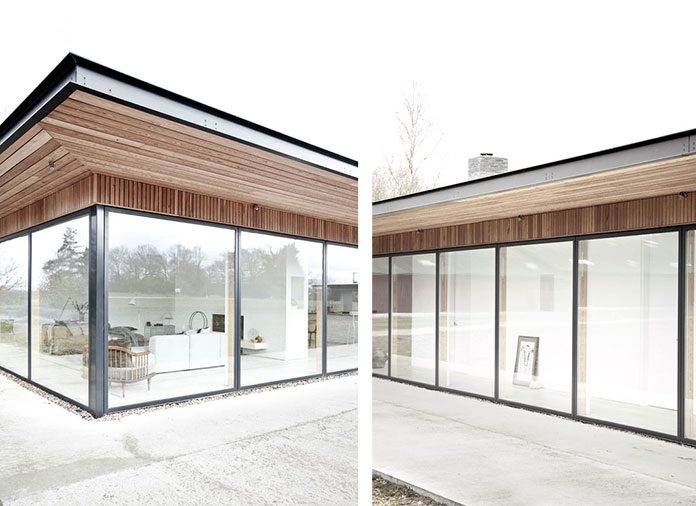 One of the striking features of the farmhouse is the large glass panels along the entire length of the front of the house. In addition to providing views of the garden, the glass façade lets in the afternoon and evening light. It also serves to blur the line between the indoors and outdoors. On the opposite side of the house, the large windows are strategically placed to frame the views of the sloping meadows. 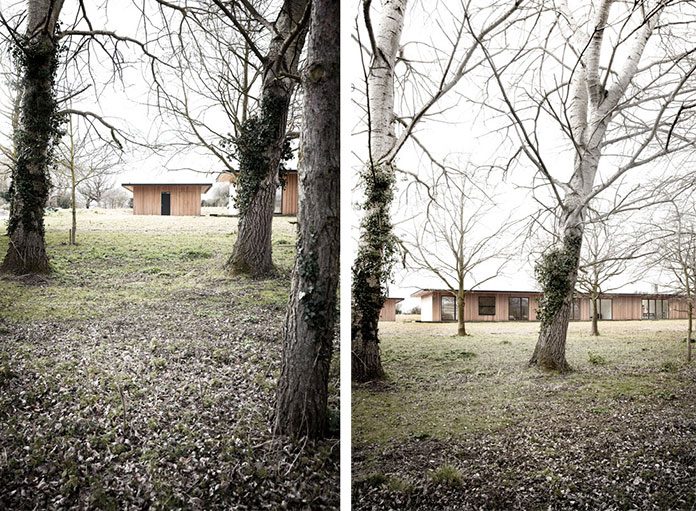 The farmhouse is constructed using wood beams and dark gray steel frames for the windows. The exterior is clad in vertical slats of Larch wood to match the existing structures on the farm, to create harmony between the old and new buildings. Along with the window frames, the fascia board on the roof and the brick chimneys are varying shades of gray to compliment the Larch cladding as it patinas with age. 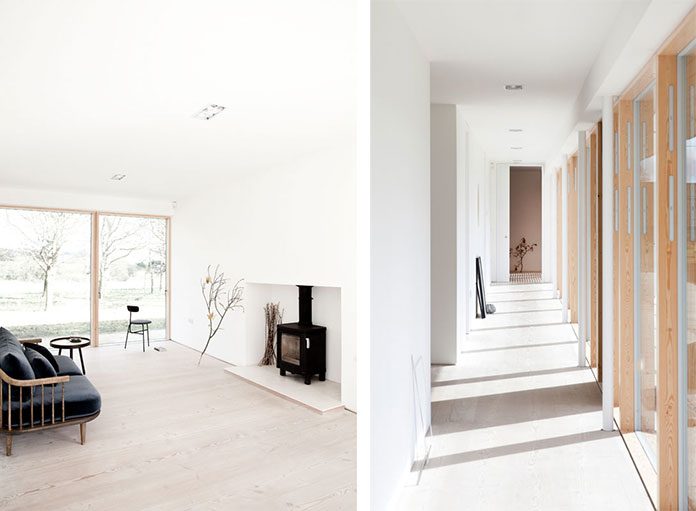 Guests approach the house via the main path through the garden leading to a central ramp to the front door in the middle of the house. The layout of the home is designed as two main sections with the main entry hall in the middle acting as the dividing point. The spacious hall is equipped with a wood burning stove and has a view through the house towards the line of trees separating the house from the meadows. A gallery hallway runs along the glass façade the entire length of the house providing an unbroken view from one end of the house to the other. 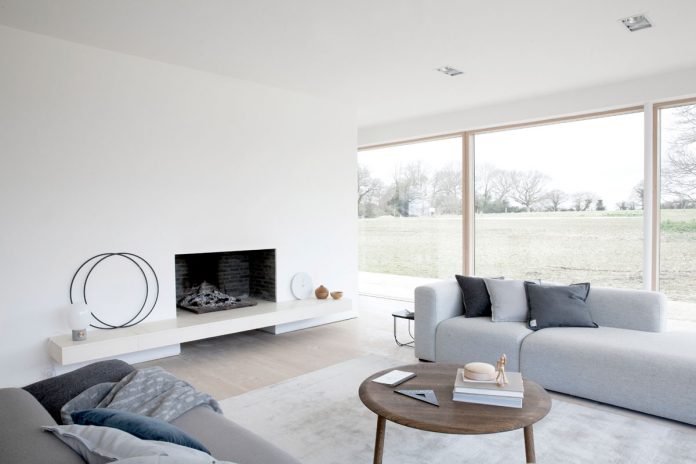 To the left of the entryway, the semi-public area is designed as one large, open room, divided into areas for the living room, dining room, and kitchen. The kitchen and dining room are kept open to each other while the dining and living rooms are divided by a central brick core containing a wood burning stove. The living room is at the end of the house with two of the three walls being floor to ceiling windows. 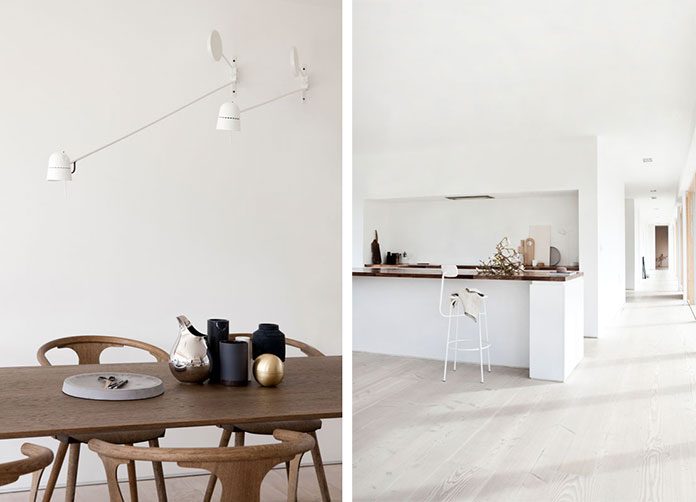 On the other side, the more private area of the house is reached through the gallery hallway containing two bedrooms, a bathroom, and the master suite. The two bedrooms and shared bathroom rooms are closed off for privacy from the front window façade but have large windows on the opposite side looking out to the meadow beyond. The master suite is more open with windows on both sides but use semi-transparent hardwood shutters to let light in while still providing privacy.

Reydon Grove Farm might not be a typical farmhouse, or a typical house for that matter. But, Norm Architects delivered a design that is beautiful, functional and respects the context and environment in which it stands.