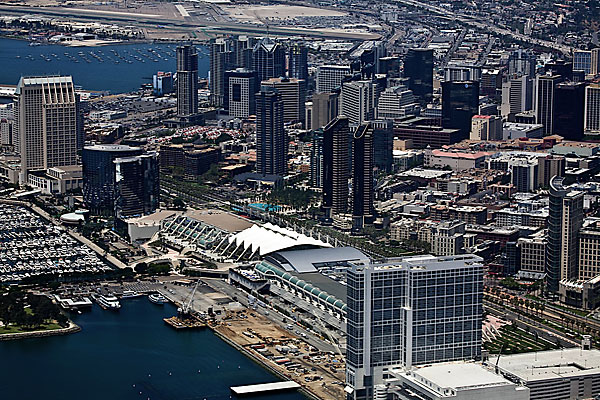 More Euro than Europe, The Keating is carving an Italian contemporary design niche in the Gaslamp Quarter of San Diego.

The brainchild of San Diego real estate entrepreneur Edward Kaen, The Keating is poised to set the standard for urban boutique hotels across the country. The coup de téte was Kaen luring Italian design powerhouse Pininfarina into their first ever hotel design venture.

Pininfarina has been at the forefront of Italian design innovation for 76 years as an automotive designer, most notably for Ferrari and Maserati. In 1986 Paolo Pininfarina formed Pininfarina EXTRA to expand the industrial design to interiors and product design. With such notable collaborations as Jacuzzi and Snaidero kitchens, the time was right for Pininfarina to step into hotel design.

“Pininfarina had been approached on numerous occasions in the past to collaborate on hotel projects of varying scales – from designing one room in a hotel to projects with a couple hundred rooms. They turned them all down,” said Kaen. “The Keating provided the perfect opportunity because of its intimate size, historical significance and its location in one of the most dynamic, emerging cities in the United States.”

The Keating building, built in 1890, once accommodated Henry Lord Gay, the founder of the American Institute of Architects, the San Diego Public Library and the San Diego Trust & Savings Bank, of which the vault is still intact in the basement.

Taking inspiration from the historic building, Pininfarina created juxtaposition between the historic and modern by leaving sections of the exposed red brick as an accent to the modern look and feel. The hotel’s signature red color is a unifying theme throughout the hotel. The 35 stanzas (or guest rooms) were designed as open space with high ceilings and no interior walls. In contrast to the signature red color palette, stanza vanities and water closets are painted in cool blue hues and feature stainless steel accents.

“Our goal in the design of The Keating is to evoke emotion from our guests,” said Paolo Pininfarina. “We want them to feel as if they are taking part in an exciting new experience, but one that has a familiar, comforting feel derived from pleasing colors and textures that create a sense of relaxation.”

If guests care for evening cocktails or a late nightcap, The Vault is the place to go. Located in the basement of The Keating, the original bank vault has been converted to a wine vault with a swanky lounge accented in red brick, plush seating and a stainless steel bar. The trademark red accent walls and red lighting set the mood. Like the rest of The Keating, the bar and furniture were custom designed by Pininfarina. The components were built in Italy and shipped to the hotel. The Vault is reserved for hotel guests and club members.

Â The Gaslamp Quarter has plenty to offer nightlife enthusiasts and in true urban fashion, everything is within walking distance.

Stingaree, a popular restaurant and nightclub, recently celebrated its one-year anniversary and it’s easy to see why it is the hottest nightspot downtown. Split into two sections, the ground floor is dedicated to the restaurant and a lower-level dance club. Divided by a bar, each section features a two-story, double-sided waterwall lit with color-changing LED lights.

A second-story, mezzanine level overlooks the dance floor of the club below. It is lined with sofas, occasional tables and booths designed for bottle service. There is also a private penthouse with a dedicated bar and wait staff. The piéce de résistance is the Rooftop Oasis. Boasting two bars, private cabanas, fire pits and even two beds, the deck treats club-goers to a view of downtown San Diego.

In the evening, the restaurant reigns supreme with culinary creations by Executive Chef Antonio Friscia. The menu is divided by course with the friendly and attentive staff ready with recommendations. The fare at Stingaree is as impressive as the surroundings.

Late night the tables are cleared from the restaurant floor and the music pumped up as the entire club comes alive. It is rumored that six million dollars was put into the creation of Stingaree and considering the design and attention to detail, it’s not far fetched.

For a taste of all things Australian, downtown San Diego’s newest hotspot is Bondi Bar and Kitchen. All the components of this contemporary style restaurant have been imported for a continued touch of authenticity: bars, tables and flooring custom made using the great hardwood, jarrah, from south Western Australia; limestone and bluestone flooring from the Pacific coast; grass tree fronds embedded in the partition glass, desert spinifex; walls lined with raw iron ore from the Pilbara. All materials in sight are pieces of the land down under.

The Aussies are very serious about their beer. Bondi has installed a state-of-the-art tap system that delivers the coldest, freshest beer to each of the venue’s three bars. Bondi imports all six beers on tap, which are otherwise unavailable in the US. There’s no Fosterâ’s here. Ask for a Cooper’s Sparkling Ale instead.

The trend of contemporary urban design is on the rise in San Diego’s Gaslamp Quarter, known primarily as a party spot for 20-somethings. The level of sophistication is rising as evidenced by The Keating, Stingaree and Bondi. But that’s only scratching the surface.