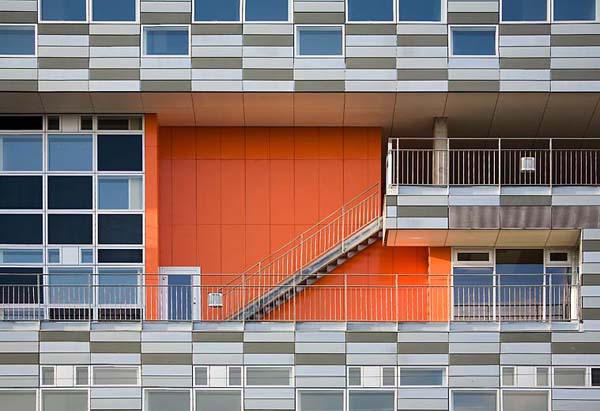 The Danish pride themselves on art, architecture and design, with architects such as Jørn Utzon, Arne Jacobsen, and Henning Larsen counting among the elite. This preoccupation is clearly reflected in the culture of Copenhagen, where during the summer months, the Danish Architectural Center offers tours around the city to showcase its developing community. Today, Copenhagen is considered one of the hottest spots for interesting architecture in Europe. Having managed to maintain a fine balance between historic buildings and the continued growth of the metropolis, Copenhagen has preserved its historical identity whilst looking to the future.

The architectural journey of Copenhagen starts from the moment you touch down at the airport. Kastrup Lufthavn Terminal 3 is an intriguing structure, inspired by the wing of an airplane. The structure has been completed using glass, steel, and aluminum; giving the building a light, elegant impression as if it might take off in flight. It follows traditional Scandinavian design principles of open space and simple lines. The best thing about this building, however, is that you can view it from all angles, provided you get a window seat.

Not too far from the airport is one of the most extraordinary community developments know as, Ørestad. The development is nearly 20 years in the making, and stretches 600 meters across. The development of this community was based on the ideas proposed by a Finnish architectural company, which won a competition for the project in 1994. The proposed ideas include a world class, holistic community that incorporates high-end architecture and a city plan. The project is split into four parts with master-planning and architecture designed by world-renowned architects including, Daniel Liebeskind, Jean Nouvel, Zaha Hadid, Norman Foster, and MVRDV. Each of the four districts is linked by the surrounding natural resources. It offers residents great opportunity in terms of employment, schooling, housing, and great outdoor activities. With only a ten-minute metro ride to the center of Copenhagen, it has all the facilities required of a developing area. Part of the reasoning behind Ørestad was to offer a contrast to the traditional sections of Copenhagen: a development that could showcase potential architectural genius to the world. One development in Ørestad garnering attention is Steven Holl’s T-houses. This American architect has designed a series of T-shaped apartment complexes, which maximize green space beneath the structure by elevating the majority of the living structure to the horizontal bar of the T. This brilliant design idea enhances the ability to utilize the Scandinavian light and gives more residents a stunning view compared to traditional buildings.

Another building gaining publicity in Ørestad is the beehive or Bikuben-literally translated to “bee cube”-presumably named so because of its cube-like structure. Non-traditional gaps in the building structure were designed to make room for social areas, which are shared by all the residents. The building houses communal student accommodation for students from surrounding universities. It distances itself from traditional student living by placing the communal facilities on different stories toward the center courtyard of the building, making it possible to see from one common area to another. The student rooms spiral around the communal areas enhancing the social experience. The architects at A.A.R.T., the masterminds behind Bikuben, intended the structure to be an eye-catching building, which they have unquestionably achieved, giving Danish youth culture a quirky building fit for challenging conventional belief.

In 1999, an astonishing building was built in Copenhagen as an addition to the Royal Library. The building has been coined Den Sorte Diamant (The Black Diamond) as a result of its angular exterior walls made from highly polished black granite imported from Zimbabwe. Situated on the harbor front, entrance is facilitated by “harbor-busses” that sail straight to the front door of the structure; this is by far the best way to see it. The majestic building is reflected in the water of the harbor producing impressive geometric shapes, which contrast traditional surrounding edifices faced in oxidized copper that rise from behind the black sculpture. The Diamond’s apparent ethos is of cultural education and this is reflected throughout. The impressive décor includes a 200-square-meter painting by Per Kirkeby. Aside from interior art, the building itself offers a great homage to abstract art. It has been finished using steel, glass, and blue oyster sandstone from Spain, which have been brought together in a simple, nearly understated approach, so as not to distract from the building as a whole. The light interior exposes the angles from the black exterior with the help of slowly rising escalators and walking bridges. The interior, however, unlike the exterior, is very organic with smooth, curving lines. Architects, Schmidt, Hammer and Lassen, designed the interior to mimic the current of the adjacent harbor, while granting harbor visibility via a massive wall of glass in the center of the building.

The Black Diamond shares its place on the harbor front with the Copenhagen Operahuset or Opera House, which was designed by Henning Larsen and erected in 2004. During the initial stages of the project, it experienced a number of public debates over its location and the aesthetic of the exterior. The Opera House is one of the largest buildings in Denmark, containing over 1100 rooms, consisting of nine stories above grade and a five additional floors below grade. The hardscape surrounding the building is comprised of Jura Gelb, a chalkstone from southern Germany, and Chinese granite cobblestones. This gives the building a very grandiose appearance that is fitting of the building’s intended purpose, yet still complements the surrounding community. The roof has a 32-meter long extension, on which projected light reflects at night accenting the building’s beautiful glass façade. It casts a warm glow, making the roof line appear as though it is floating. From the front of the Opera House the roof overlay and column-like structures hint at influence from Asian temples with a modern twist. The entire structure can be seen from across of the harbor in the gardens of the royal castle, Amaliehaven.

The Tycho Brahe Planetariet, a planetarium designed by Knud Munk, is another extraordinary building located in the midst of Copenhagen. Upon approaching the building, one is immediately aware the building was built for a unique purpose. The eye is initially drawn to its cylindrical shaped tower and angled roofline, finished with a symmetrical pattern made from glazed tiles. It is only when you come near that you find a daring contrasting building, which houses the entrance to the planetarium. For most children and young-minded adults, the excitement lies within this building as it houses the planetarium’s cinema; a 360-degree screen with numerous projectors hidden behind screens, where illusions like that of a desert sky can be digitally recreated.

The key to many of these buildings and their success in Copenhagen comes down to traditional Danish mentality. Art, household items, and buildings all must follow the same criteria: simple, purposeful, and made with quality.