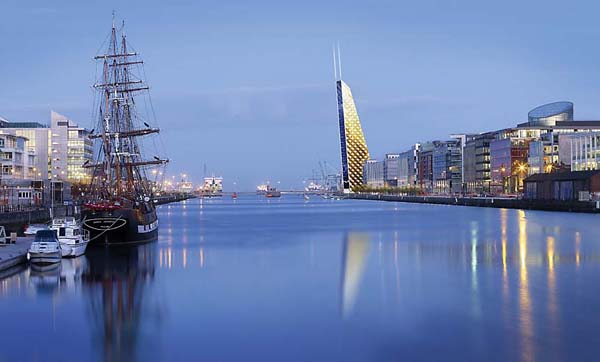 The historical significance of Ireland’s capital city spans centuries of commerce and innovation. As Dublin prepares to increase its visibility in a global economy as a member of the increasingly powerful European Union, the renovation within its Dublin Docklands commercial properties represents a new day in the Irish economy that will be largely completed by the end of the decade.

To properly create these new national buildings of international commerce, a variety of architectural insight from Boston to Portugal was hired. The results are multiple buildings and business districts influenced by global designs for a global economy.

Spencer Dock
The development of the Spencer Dock business district is the centerpiece for the “new” Dublin. Once completed, Spencer Dock will have over 300,000 square meters of commercial space that will be home to domestic and international businesses, as well as entertainment and leisure organizations. Residential properties, restaurants, bars, shops, health clubs and leisure facilities will canvas the district.

“If you are familiar with the ‘Celtic Tiger’ economy and you want to see it in action, a trip to the Spencer Dock area is well worth it,” says Anna O’ Driscoll, an Ireland native who now lives in Phoenix.

Perhaps the architectural gem situated in the heart of Spencer Dock’s business district is the world-class No. 3 office building. Its modern design is further enhanced by the building’s waterside location, as office suites range from just under 6,500 square feet to 120,000 square feet. The innovative use of space within the office design is an additional benefit, along with its adjacent location to Dublin’s vibrant city center.

To match the public’s eager anticipation, the building has been designed by Irish-born and internationally renowned architect, Kevin Roche. Roche is known in the industry as one of the most creative designers in glass.

“I am confident that his design will deliver a landmark building befitting of our capital city, and outstanding among its competitors,” says Seamus Brennan, Ireland’s Minister for Arts, Sports and Tourism.

The spacious Centre will contain 22 multi-purpose meeting rooms and is capable of housing up to 2,000 delegates for government sessions. In addition, nearly 4,500 square meters of flexible exhibition and banqueting space was built into the design, along with associated press and delegate support facilities and general utility spaces.

“It is about time the National Conference Centre was built,” says O’ Driscoll. “Many international businesses have their European headquarters in Dublin and finding conference centers large enough to conduct global meetings can be a daunting chore. We needed more venues because Dublin is in a great location for international conferences.”

For the hotel, the developers selected a design from one of Dublin’s own, Shay Cleary Architects. Mr. Clearly himself described his design as, “A tower that is a simple, pristine, rectangular, glazed enclosure.”

The tower is designed to achieve a “building within a building” look, which will display design complexity and architectural richness simultaneously. The general public spaces of the hotel are concealed to the first five floors as the remainder of the hotel consists of guest rooms, a fitness center and spa, hotel suites, clubs, lounges, meeting rooms and winter gardens.

Designed by Martha Schwartz, the inspiration originates from the color composition found in the sun, lawn and vegetation. A red carpet fashioned from red resin-glass emerges from the theatre and proceeds down to the dock, intersected by a green carpet path featuring lawns and vegetation. The flexibility of Grand Canal Square will allow for festivals, street shows and outdoor acoustic performances.

“The concept of the Grand Canal Square and Theatre is to build a powerful cultural presence expressed in a dynamic volume. This volume is sculpted to express the various forces that create the urban piazza, the public space and inner workings of the theatre. This composition creates an icon that mirrors the joy and drama emblematic of Dublin itself,” states Libeskind.

Designed by international stadium architects, HOK Sports Architecture, in conjunction with Scott Tallon Walker Architects, the form, mass, materials and aspect are guided by the stadium’s location and surroundings. A transparent roof can be lowered toward the southern sky to maximize sunlight onto the turf to produce the best playing surface possible. The curved form of the roof is designed to reflect the sky’s color and changes with light conditions.

General admission spectators are seated on the lower and upper tiers, as two mid-level tiers are reserved for premium seating and separate private suite holders. All 50,000 seats boast unobstructed views and are as close to the field as possible to create an intimate sports viewing environment.

“Having a second world-class stadium in the city on the south side of the River Liffey will give us more options to stage international sporting events,” says O’ Driscoll.

A Dublin Dynasty
The re-birth of Dublin is a once-in-a-lifetime opportunity to discover while one of Europe’s greenest cities jumps on the fast-moving train that is our current global economy. Make Dublin your destination of choice to witness the Celtic Tiger economy and the latest in high-quality European commercial architecture.