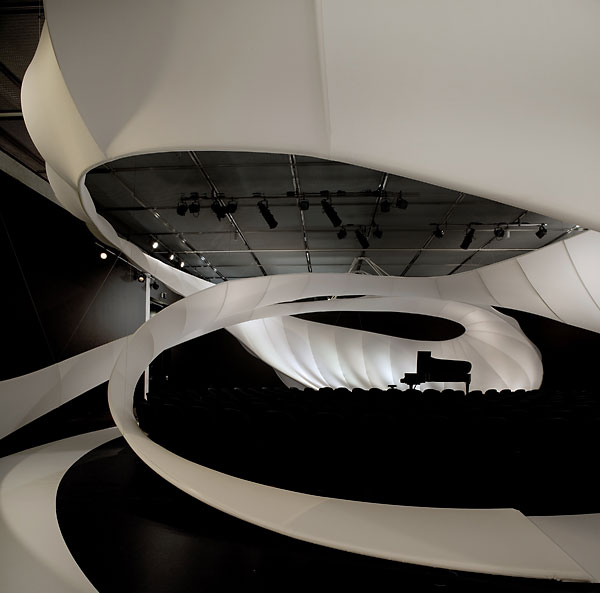 The Manchester International Festival is a cultural extravaganza that occurred throughout the city of Manchester, England for the first three weeks of July. The event drew performers of many disciplines from around the world. It also attracted one well-known architect-Zaha Hadid.

Like the music performed, a voluminous ribbon rises up from the performance space and swirls around the audience spatially transforming the box into fluidly sculpted spaces. Designed to give illusion to the size and shape of the room, the ribbon wraps around itself, layering the spaces to continually change the perception as viewers pass through the chamber.

The ribbon itself was designed with a translucent fabric membrane shaped by an internal steel structure suspended from the ceiling. The surface of the fabric shell undulates in a constant but changing rhythm as it is stretched over the internal frame. It varies between the highly tensioned skin on the exterior of the ribbon and the soft billowing effect of the same fabric on the interior of the ribbon. Between performances, programmed lighting and recorded music give life to the ribbon with a show of colors and sound. The installation is designed to be transportable and re-installed in other similar venues.

In addition to the aesthetic qualities of the ribbon, chamber acoustics needed to be considered. The choice of the metal frame and cloth rather than solid materials was primarily based on creating an acoustically transparent structure. Clear acrylic acoustic panels are suspended above the stage to reflect and disperse the sound, while remaining visually imperceptible within the fabric membrane.

The ribbon was designed to simultaneously enhance the acoustic experience of the concert while spatially defining a stage, an intimate enclosure, and passageways. It give the illusion of a flowing object floating in the room while also having the architectural solidity inviting viewers to enter, inhabit and explore.