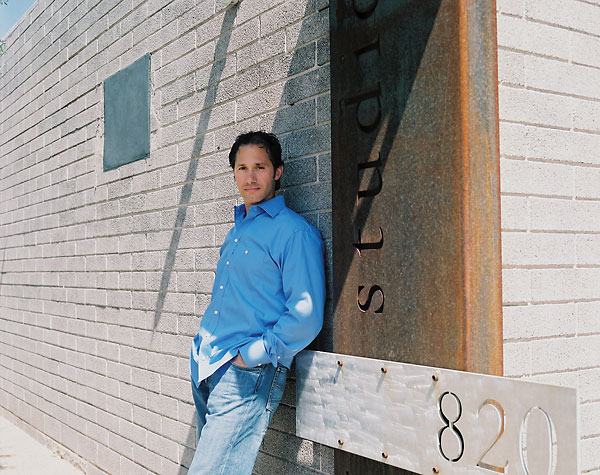 As an architect, Richard Doria has always had his eye on the horizon. Now as a developer and builder, that zest for wanting to be apart of something larger than simply bricks and mortar, has only grown larger. Wanting to add on to the growing bastion of ideas and aspirations under the umbrella of Doria Architecture, he created his own methods to realizing his wants: Modern Block Development and Formworks Building Company.

With a dedicated focus to central city, commercial and residential infill development, creating structural environments that are environmentally responsible, Richard Doria has now set his sights on an urban playground of unlimited development possibilities – possibilities that will not only benefit his bottom line, but the city of Phoenix, as well. Call it taking destiny into your own hands, call it smart architecture – it’s all a good thing.

“Other people talk about doing things, but, just do it yourself – why wait?” Doria asserts calmly, with an almost no-brainer sensibility that seems to come very natural to him. “We can now find the right property ourselves, develop it, design it and sell it. What makes everything work is that it’s all in-house; we have more control and refinement of the design process. We don’t have to constantly worry about bringing clients the next “ultra cool” project – we’re cutting the fat out of the process.”

Skeptics (and cynics) be damned, Doria goes on to note the center city market’s growing visibility. “Four years ago, downtown Phoenix was definitely a gamble – not today,” he asserts with on-the-ground experience already under his belt. “There is a strong pent-up demand for office space downtown, in particular for smaller businesses looking for something around the 3,000 square-foot range. We need to provide for it.”

“We also look for the right textures to a neighborhood, and it’s raw, industrial qualities that show potential,” Doria stresses, in regard to creating structures that will work with (rather than against) their existing fabric and infrastructure. “Walk the street – how is that new project going to coexist with its surrounding infrastructure?” he begs.

There are several projects up his sleeve of honorable ideas. From a few proposed specifically along west Fillmore (including a possible three- to four-story high-end boutique hotel concept where guests can rent rooms daily, weekly or monthly), to of course, the relocation of his own office – or main operations center – from his quaint cube near 4th Street and Garfield, just south of Roosevelt Row, to a snug locale deep in the heart of the still gritty, but equally burgeoning Grand Avenue corridor.

Doria’s commitment to fine tuning and “patching up” the tattered urban fabric that currently exists throughout downtown Phoenix is more than just respectable, it’s actually comforting.

“My mission statement is to build infill in the core, where people will congregate and hangout; [a place they will] want to be,” Doria breathes in assured confirmation. “And, all with good environmental practices, everything built will have its own major share of green building components.”

Thankfully, things are just beginning to swing into high gear. “If we do just half of what is on our drawing boards, we’ll easily be busy for another five years,” Doria closes with a look of accomplishment.

Richard Doria is not reactionary; he’s humbly revolutionary, especially in comparison to most in this town. He is among that small, but thankfully growing, group of like-minded peers who employ new ways of thinking and new ways of existing in environments otherwise forgotten, but without a doubt, all highly full of positive possibilities.