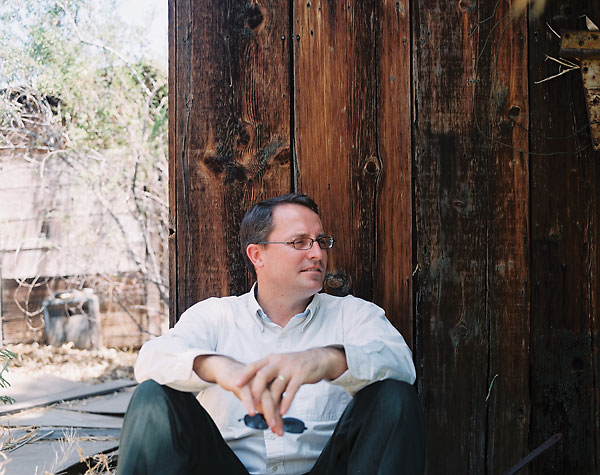 Kermit the Frog may believe “it’s not easy being green”, but Phoenix visionary Mick Dalrymple, partner in the Scottsdale retail venture, a.k.a. Green, whose business card includes the challenge “Evolve; Be Green”, believes that “green” is essential to the future prosperity – and even survival – of Phoenix.

For Dalrymple, green means a Phoenix in which economy is sustainable, that is, “Not dependent upon the need to attract more and more people through tourism or relocation in order to feed the beast of continuous development to keep people employed,” he says. Green also means, ending the denial of our water situation, which like the fossil fuel situation worldwide, is based on the flawed theory of  unending supply.

Instead, Dalrymple envisions a Phoenix that has the opportunity to become a “world-class symbol of a sustainable community in a hot, arid environment,” he declares. After all, in terms of our relationship to water resources and days of sunshine each year, there is no one like us, except perhaps Las Vegas.
Clearly, it will take leadership to effect such sweeping changes. But how does Dalrymple rate today’s leaders?
“Diamonds in the rough,” he smiles. “Of course, there are many leaders here who understand. I think Mary Manross, mayor of Scottsdale, gets it. Governor Napolitano is getting it. Among local business leaders, Dale Jensen [member of the board of directors, Downtown Phoenix Community Development Corporation] gets it. DMB [DMB Associates, Inc, a diversified real estate investment and development company founded by principals Drew Brown, Mark Sklar and Bennett Dorrance] is incorporating more and more of it in their developments, at least they are the most progressive,” Dalrymple says. “But I believe the best leadership comes – or will come – from local grassroots community activists. Clearly, they are closest to the challenges and most likely to see the solutions first.”
What, no national leadership?
“Let’s face it — Washington D.C. is in gridlock, and has been for some time. I believe lobbyist money speaks louder than local needs to our elected leaders, and getting elected is expensive,” he says. “For me, the best solutions come from local grassroots networks that link business, non-profit organizations and government, both face-to-face and by the Internet.”
So, what would Phoenix actually look like with a green-based lifestyle?
Dalrymple’s eyes brighten with the possibilities.
“Oh, wow, where do you start? As far as our structures, I see roofs that are white to reflect heat or vegetative to use the solar energy they receive,” Dalrymple says. “I see more extensive utilization of low-mass building materials to minimize the heat island effect that makes Phoenix so unbearably hot after the sun goes down. I see wider use of underground rooms or even whole structures that take advantage of the cool temperatures stored in the earth beneath our feet, which also can be accessed through shafts sunk into the ground to tap into a cooling medium.”
“I would also expect more Phoenix buildings to use thermal draft as an energy source, or cooling towers to cool interior and exterior spaces. Windows, utilizing new technologies emerging today, will be radically different. Buildings will use shade strategies such as orientation, solar design, awnings and screen walls that are integral to the building itself. And what would a green strategy be without real green? I see more trees in downtown Phoenix, low water use irrigation and the complete elimination of the old-style flood irrigation,” he says. “The amount of water used in Arcadia today could probably be used to cover half the city in native trees.”
Beyond our structures, the way we get around will be impacted by a green strategy, according to Dalrymple. He foresees everything from greater use of bicycle and pedestrian transport, made more comfortable because the heat island effect has been minimized, to a transportation system based on plug-in hybrid vehicles, vehicles powered by fuel cells, electric buses and a light rail system that integrates air and ground transport within the city, as well as between population hubs like Phoenix and Tucson.
“I’m already seeing changing attitudes today even with the customers we see at our store, a.k.a. Green,” Dalrymple explains. “Not long ago, most customers had already done a lot of technical research before they decided on a green alternative. Now, people come in already convinced that green is the way to go and [they] just want to get it done. That tells me that the demand for green products is about to enter the mainstream in a big way.”

Twig & Twill: Making the Planet Better One Person at a Time