Home travel Get Off the Grid in a Tiny House 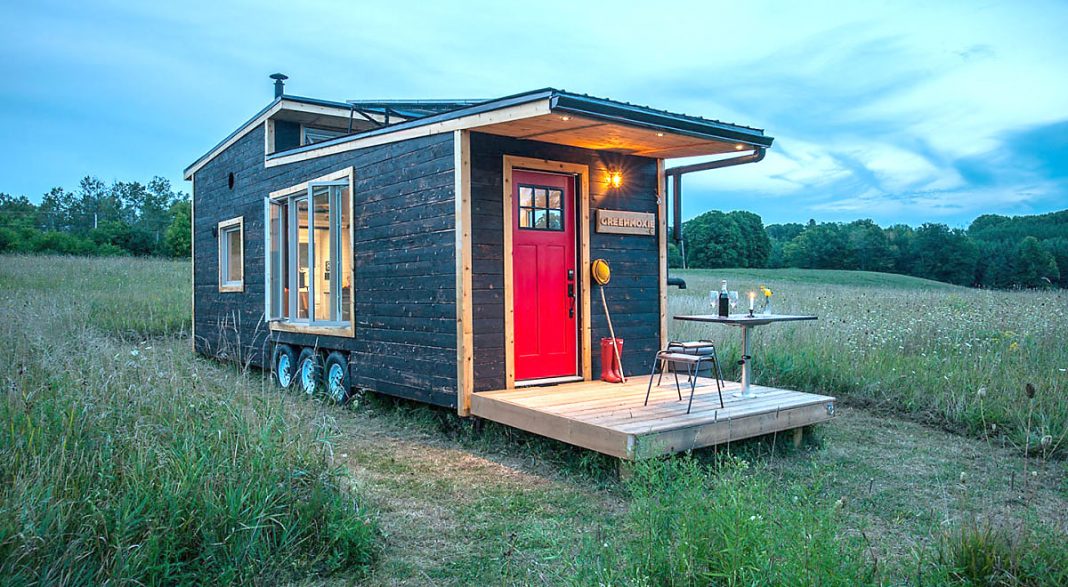 For such a small house, there’s a lot to like.

The tiny house movement is not new. We’ve seen lots of great examples of people creating innovative new ways for livin’ small, from New York studios to tiny guest ‘sheds’ in backyards. There are also many trailer options for those with a little wanderlust. 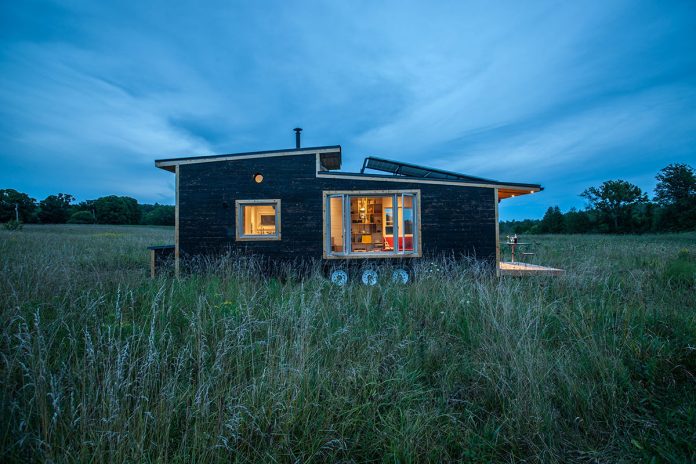 Canadian green living magazine, Greenmoxie, put their money where their, err… type was to design and build the ultimate tiny home. It’s called the Greenmoxie Tiny House Project, which is descriptive but makes you think 100% of the creativity went into the actual project and none was left over for naming it. And that’s ok because they designed a winner.

Led by Greenmoxie co-founder, David Shepard and green building consultant Ian Fotheringham, the design focused on a small enough footprint, mounted on a trailer frame so the tiny house can be transported. Though, Greenmoxie does state that the tiny house should be moved carefully and was not designed to be a fully mobile travel trailer. More’s the pity.

Obviously, the biggest challenge in tiny home architecture is making the limited space livable by using the space with maximum efficiency and making it ‘feel’ bigger. The tiny house is 340 square feet, about the size of a small New York studio apartment. 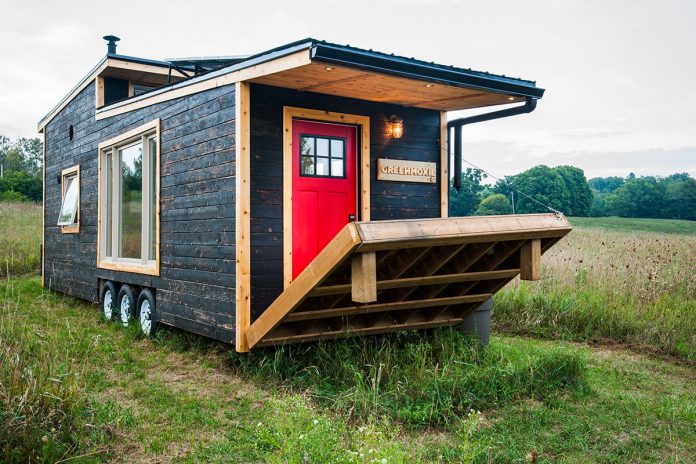 The front door is at the tail end of the trailer. To extend the indoor space the designer used outdoor space in the form of an ingenious deck that is lowered like a drawbridge for a front porch that is large enough for a table and a couple of chairs. 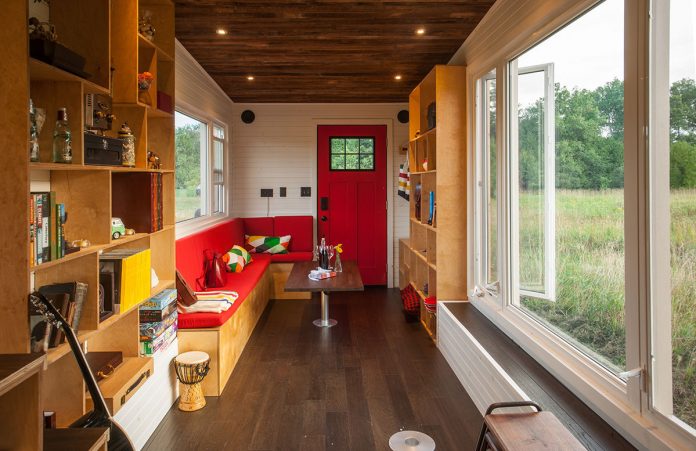 The main living area of the home is kept completely open. It contains the living room with an L-shaped built-in bench seat and coffee table. There are two floor-to-ceiling shelves for added storage. Large windows on both sides provide plenty of natural light. 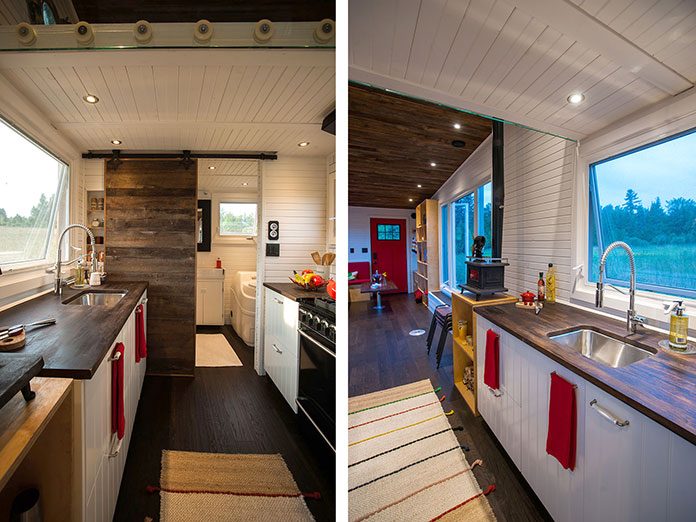 The living room leads to the surprisingly functional kitchen with lots of counter space and a full-size stove, oven, and kitchen sink. The coffee table can be pulled from the built-in base by the seating and the support can be extended and placed by the kitchen to be used as a dining table. 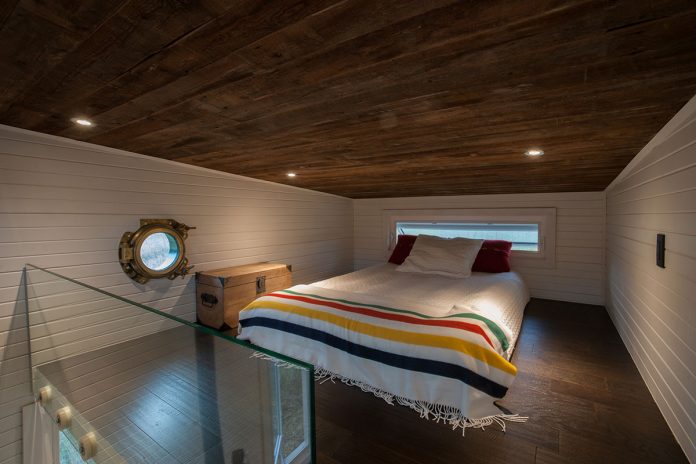 Stairs lead up to the bedroom loft that sits above the kitchen. The stairs serve the secondary function of storage cubbies for dishes and other kitchen supplies as well as the refrigerator. The loft space is large enough for a double bed with some furnishings. But nothing too tall. The roof is sloping from about three feet up to about four feet, so it’s not for standing.

The bathroom is all the way in the back through a sliding door from the kitchen. The bathroom is fairly roomy containing a full-size shower with a rain head, shelves for towels and bathroom supplies, sink and a composting toilet. 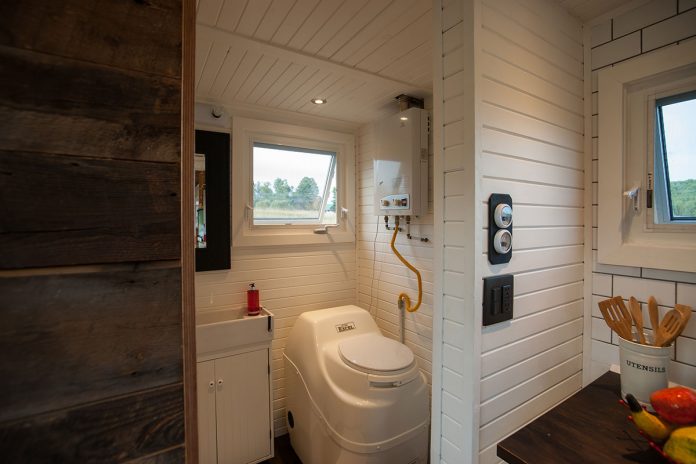 The composting toilet is significant as this tiny house was designed to be completely off-grid. The entire purpose of the tiny home movement is to have a smaller carbon footprint and this was the main objective for Greenmoxie.

Solar panels on the roof generate electricity that is stored in on-board batteries and low-voltage LED light is used. Propane is the second energy source and is used for the stove & oven, refrigerator/freezer, tankless water heater and overall heating. There is also a wood-burning stove for heating. Cooling is passive so I probably wouldn’t park this thing in Phoenix. 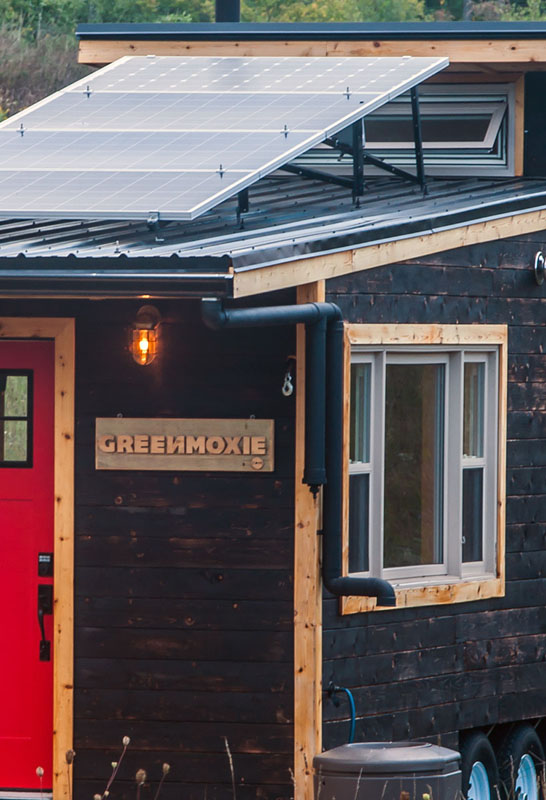 Water is collected from a roof recovery system and a 200L rain barrel with a three-stage ceramic water filtration system. Under the bench seat is a tank for holding the filtered water. There is an additional 200L gray water holding tank.

The house is wood-framed with Norbord OSB wall, ceiling, and floor sheathing. The outside is cedar siding, charred and sealed with linseed oil. Reclaimed wood was used throughout and the roof is corrugated metal. The windows are also reclaimed, including the cool porthole in the bedroom loft. 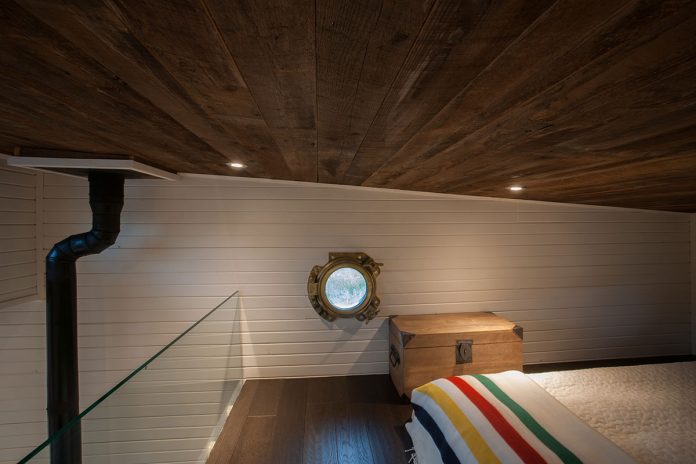 With all that wood, this sucker is heavy and needed a custom built 10-ton trailer platform so you won’t be towing it with your Prius. But, depending on the outcome of today’s election, you may just want to tow it across the border to Mexico or pick it up in Canada and ‘get lost’ before crossing the border on your way back.

It costs a mortgage-busting $65,000 and is built-to-order in Ontario, Canada. For full specs and information, head to the Greenmoxie website.