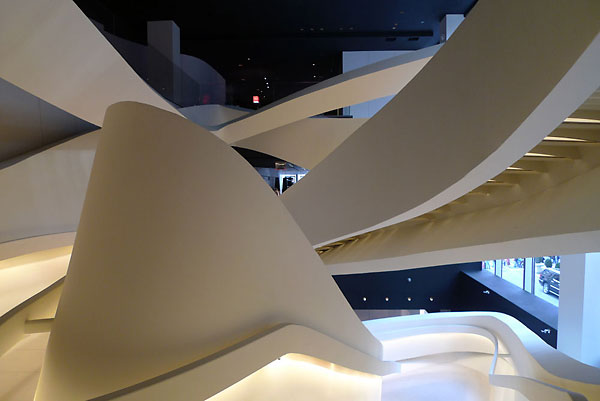 The completion of the new Armani Fifth Avenue store in New York marks the hat-trick for the Armani/Doriana & Massimiliano Fuksas collaboration that started with the groundbreaking Chater House Emporio Armani in Hong Kong in 2002. The ultra-modern Armani Ginza Tower in Tokyo followed in 2007 and now the trilogy is complete.

The building that incorporates Armani/5th Avenue holds a very important place in the history of architecture because its façade is one of the first examples of the “International Style”. When dealing with such a cultural milestone, the exterior is totally New York, while the interior needed its own identity, a reflection of the flair and aesthetic values that define the Giorgio Armani style.

The grand staircase is the focal point, an exciting sculptural feature which connects all the different levels that accommodate the Armani universe range by range. The sculptural form of the ribbon-like staircase is covered in smooth plastic creating a whirlwind effect skimming each floor and connecting the dynamic Armani universe.

Every element of the internal design follows and satisfies the movement concept generated by the staircase, becoming a part of the same whirlwind. Innovative in both layout and content, Armani/5th Avenue is the first concept store in which all the Armani products are presented in a single space, where the same design has been adopted throughout: the subtle colors and restrained shapes emphasize the value of the product.

Also included in the store is a restaurant filtered by an amber veil, there is a splendid view of the 5th Avenue and in the end of Central Park. The colors and the materials utilized are the same of the rest of the show room, but the suggestions are new and different.

The sophisticated image of the Giorgio Armani brand rich in translucence and intimacy is juxtaposed with the immediacy and modernity of the spaces dedicated to Emporio, identified by more expansive areas in which shafts of white light cut through and are reflected within the setting.

But the most important aspect incorporated along the internal pathway between the zones is the element of surprise. To seek to incite emotion is as much the remit of the architect as it is of the designer.

Contrary to most other projects where the client is rarely encountered, Giorgio Armani has been deeply involved, always ready to engage with every little adaptation of the concept.

Working with the designer was an unusual assignment, usually it is the building, the external architecture that takes precedence over the content. For the Ginza project the opposite was true: the exterior is a glass tower, totally merging into the Ginza skyline, its glass surface mirroring and relaying reflections of the sky and the surrounding buildings, full of different lights and colours throughout both day and night. The permeability of the surface is toned down by a cascade of brightly lit leaves that delicately float down the facades and, according to the time of day or the season, are modified in intensity and color. 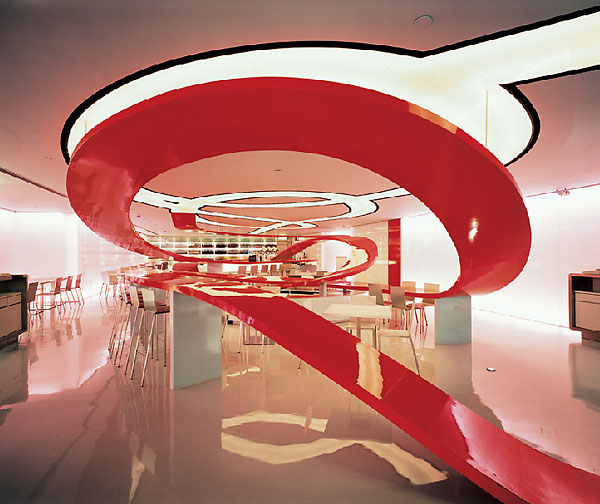 Emporio Armani project in Hong Kong was born with the insight that global culture is an experimental territory of many identities. It is the encounter of diverse modes of sensing the world. Architecture and fashion are aspects of our reality that originate from the same universal culture. Architecture appears to be permanent whereas fashion is ephemeral, but the acceleration of our society puts these values in competition.

The Emporio Armani in Hong Kong refuses any form of traditional architectural formalism: it is attentive on the “empty” space rather than formation the real inspiration is not the decoration, but the fluxes inside the shop. The invisible traces of people moving through space are the only possible reference. The twin-curved glass incised with an abstract pattern stabilizes three spaces: one internal, one external and one interspatial.

The lighting apparatus disappears, the geometry of the light source is lost; the glass wavewall becomes the light source itself. The pavement and the ceiling reflect back images infinitely, neutralizing and immaterializing themselves.

The space at this point becomes a fluid ground on which one passes through the emporio shop, the cafè, the bookshop, the flower shop and cosmetics shop. The walls push their limits and become illuminating objects.

The furniture made of sheets of stainless steel clad in soft and translucent materials are surprisingly comfortable. The structure disappears under waves of light.

The restaurant becomes a synthesis of simple functions and the thrilling “red ribbon” that defines the space. The red ribbon realized in fiberglass creates tension and meaning. It is a line , almost an automatic writing, that builds spaces (bar, reception, dining space).