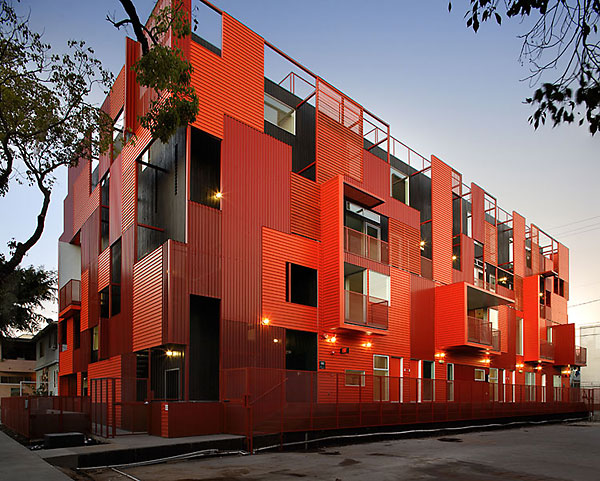 A new housing development in West Hollywood, California is turning heads for an obvious and not so obvious reason.

Formosa 1140, designed by Lorcan O’Herlihy Architects (LOHA), is a striking eleven-unit residence with a bright red and orange façade. The core of the building is black broken only by doors and windows. An outer skin is comprised of corrugated screens and panels that are placed in a seemingly random pattern. However, the method produces a choreographed effect which reveals and conceals certain windows and doors. The outer façade also acts as a screen to shade the west facing units from the sun.

The unique front unit faces the street and extends to three levels of entry foyer/den, an upper living room, two bedrooms, three baths and a large terrace. The remaining two-story units, on two tiers, comprise open living/dining/kitchen areas with a study and bath on one floor, while two bedrooms with two baths and balconies occupy another floor. As an added benefit the four top-tier units enjoy roof deck views of the Hollywood hills.

In a neighborhood rife with housing blocks with central courtyards for the residents, Formosa takes what would be the internalized open space of the courtyard and moves it to the exterior of the building to create a park which occupies approximately one third of the project site.

As a result of shifting the common open space to the exterior and pushing the building to one side, the units are linear allowing for cross-ventilation for every unit. External air is drawn in from the outside and expelled through the layers of perforated metal and small openings.

“This project presents a challenging but influential opportunity in regards to the creation and inclusion of an urban park in a private development,” said Lorcan O’Herlihy. “The park is accessible to the public at large, not solely residents with granted permission. Formosa 1140 contains within its own genetic code the imprint of a larger urban design that will offer some kind of public space back to the city and in so doing, distribute a patchwork of parks across Los Angeles’s formidable grid.”

The creation of this park space resulted in a series of negotiations between the developer, Habitat Group Los Angeles, LLC and the City from which a unique, more fluid, model of community planning and development emerged to the benefit of all parties involved. The outcome of these negotiations is the leasing of the park to the City of West Hollywood, to develop as part of a network of pocket parks throughout the City. [photos: Lawrence Anderson]