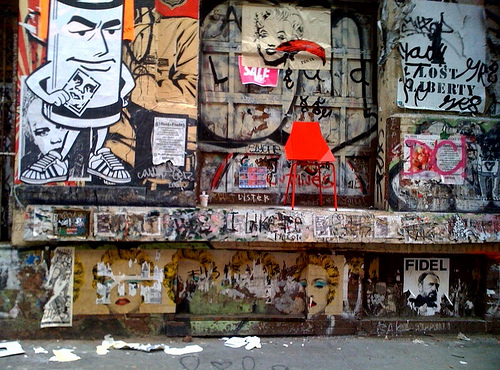 To add a level of marketing brilliance, they created a Twitter account to let people know the general locations, a Flickr account to post pictures of the chair’s locations and even a map of some of the chairs movements which were tagged with GPS devices. The amount of attention this promotion has received was fantastic. I went looking for three of the chairs in my area myself. I got to one location 10 minutes after they Tweeted it and the chair was already gone. People were following and ReTweeting and going on this urban “Easter egg hunt”.

Then, someone decided to change things up for the second day. Unfortunately it was not a change for the better. Day 2, they decided not to tell people the location of the chairs when they dropped them off. The only updates were of the chairs getting picked up and where they got picked up from after the fact. The ReTweets and chatter has gone down considerably as well as the Flickr photo views as people are losing interest. It’s easy to see why as now we feel like we’re viewing something happening from a distance whereas yesterday, people felt involved.

It was a great promotion and a great idea, unfortunately, they tried to fix what wasn’t broken and day 2 is turning out to be a bust compared to the exciting day 1.

At 4:10 New York time, @realgoodchair resumed Tweeting the locations of the chairs and posting the location pictures on Flickr. Hopefully they can get some interest back and end day 2 with a flurry.