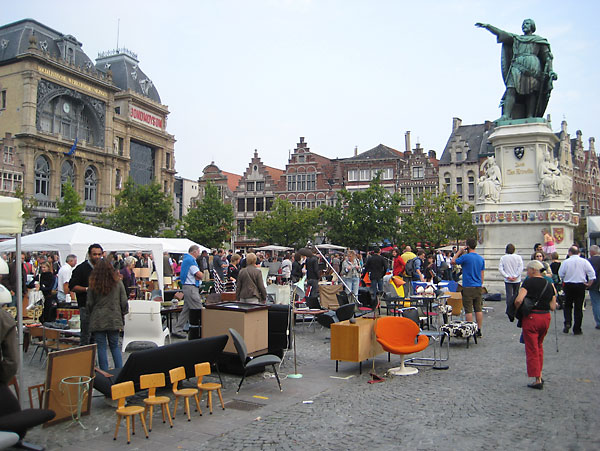 This is the first of many posts of my travels to Belgium and Germany. I am in the city of Ghent located 53 km northwest of Brussels. Ghent is one of the oldest cities in northern Europe and the history shows.

I am staying at the Ghent River Hotel in the heart of the city. Just down the street is a wide-open courtyard and one of the many city squares. This one is called Vrijdagmarkt which translates to Friday Market. The market opens on Saturday, set up like an upscale flea market with waffle carts, a cheese bus and lots of clothing vendors.

On Sunday morning I ventured out to the Vrijdagmarkt in search of the world famous Belgian waffles for breakfast. The market was bustling but the clothes and food were gone. I their place was a mid-century modern shopper’s dream. The marketplace was filled with all sorts of modern furniture treasures. Some things I’d never seen before and others were very familiar. I recognized well-used chairs by Carl Hansen and Herman Miller along side beautiful sofas of which I’ve never seen before.

What I had stumbled upon was the annual Design Market sponsored by the Design Museum Ghent. Talk about being at the right place at the right time…

Coming soon: a look inside a restaurant in the oldest building in Ghent, built in 1100. Until then, enjoy the pictures of the Design Market.

New Modern Library for the City of Bruges