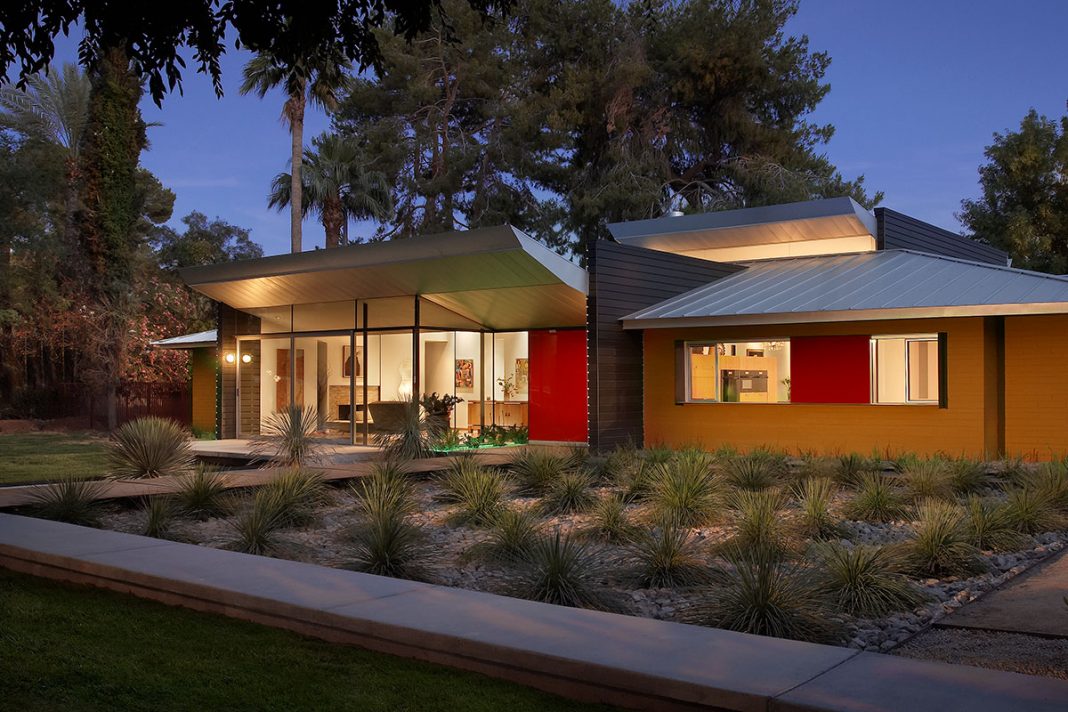 Most people might think Phoenix doesn’t have much history. Sure, it’s a young city, but there are plenty of historical structures worthy of mention. Just be sure to brush the dust off first.

Before its renaissance, a 1947 ranch-style home in Phoenix was unremarkable and, because of the steady to intermittent flow of traffic down Missouri Avenue, not worth the risk of rubbernecking for. The sun-baked, pink paint on its brick façade was faded, it was partly secluded by shrubs and ivy left the house drab. Jerry Little, along with his Phoenix-based architecture and construction firm SEAD, modernized the sexagenarian house and rescued it from mediocrity by giving it a dramatic street presence as well as updating the interior. 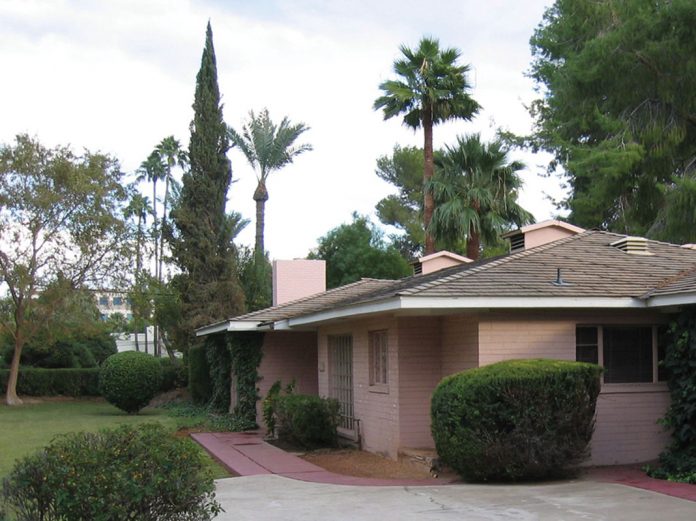 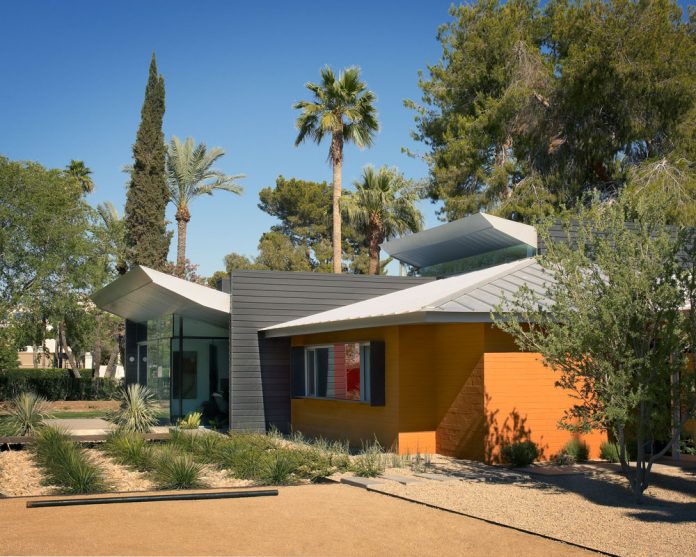 The walk from the 6-foot concrete and steel plates to the landing by the front door is significant metaphorically and from a sensory perspective, according to Little. The unsteady steel plates, an attention-getting device, shift focus away from any distracting thoughts; the landing is a metaphor for the house’s stability.

“The walkway is a transition from the big world to the house,” he said. “The steel plates are set on a concrete pier, so the edges kind of bounce. You want to catch their attention to let the worries of the day go and to be aware of the house and the entry. When you walk on the concrete landing you get the solidity and strength of the house.” 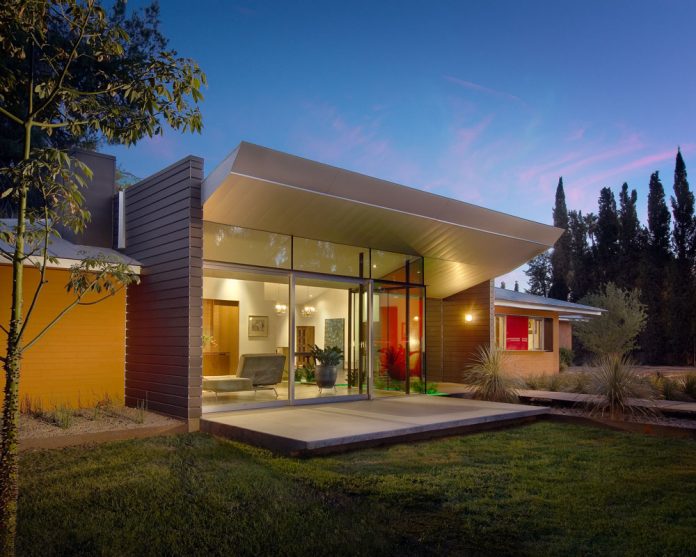 A bright, shiny red glass pivot door—about 5×8 feet in size—beckons all who stand before it. “The front door is very important because it’s the first thing you touch in the house. It sets everything up in terms of what you expect,” Little explained. “When you park you see the door, so there is a visual cue where to enter the house.”

Light-emitting diodes (LEDs) in a long planter near the front door can alternate colors to reflect the owner’s feelings or to inspire new ones. The planter is divided by a steel bridge and by glass as it extends outside. The lights were also employed as another attention-grabbing device.

“A lot of architecture is lost at night,” said Little. “So we wanted to create some interest with light and color. We wanted the house to have some personality.”

The front of the house was painted ginger, albeit begrudgingly. Workers tried to sandblast the old paint off the home to expose the brick but stopped after realizing the mortar was crumbling. Galvalume metal was selected for the roof, 6-foot overhangs and soffits due to its light-reflective properties, durability, sustainability and modern look.

New floor-to-ceiling glass with sliding doors in the front and back of the house helps diminish the barriers between the inside and the outside. The glass was inserted not just for the sake of modern architectural principles, but because owner Griffin Cipolla wanted to see the lush home’s landscaping from indoors, and he wanted more natural light to flood inside. 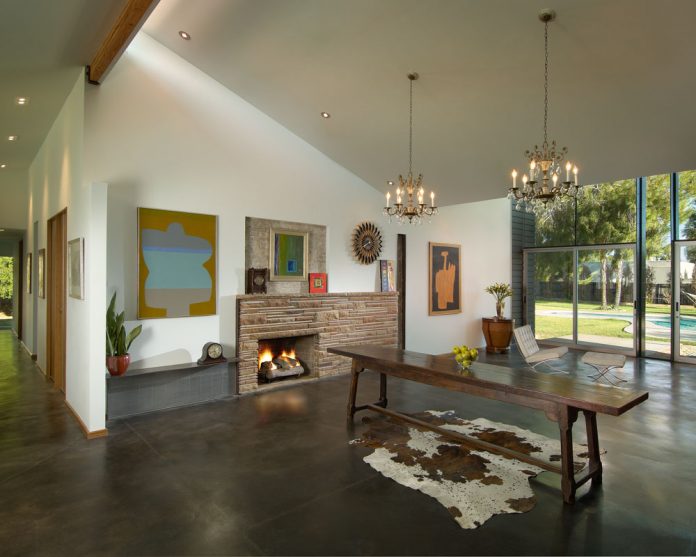 SEAD basically gutted the center of the house and made a minor addition to the front and back of the house, adding about 600 square feet. Specifically, they enlarged the reading room and kitchen, as well as added a new living room. They also relocated a formal dining room to what was once the living room.

Cipolla wanted the interior to be more open without sacrificing the feeling of closeness created by the compact house. Little found a solution using inverted ceiling vaults. “With the open plan, the owner wanted to keep the intimacy, but didn’t want the hard-lined walls to define the house. The inverted vaults create low points, which give you a feeling of intimacy and closure of spaces,” he said. 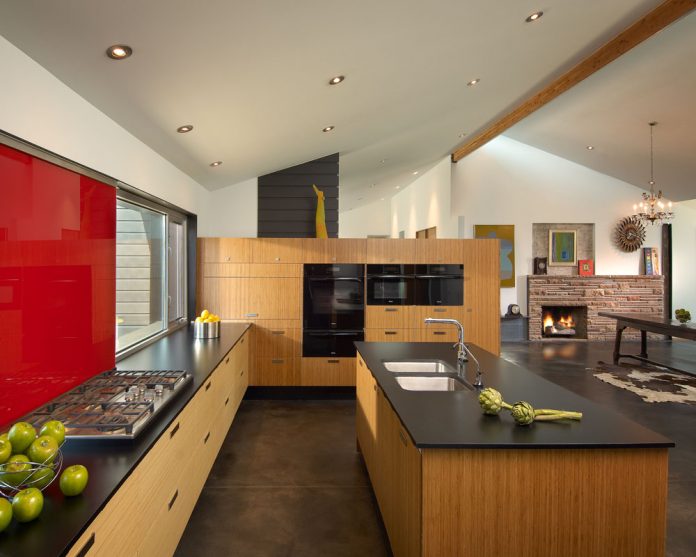 In the kitchen, natural and amber-hued Plyboo, or laminated bamboo plywood, cabinetry was chosen in part for its eco-friendliness. Concrete countertops will be added in the future. Stained concrete flooring with caramel, grey and black colors was laid throughout the house, while other additions include new interior doors, recessed lighting, sconces and a glulam, or glued laminated timber, beam between the dining room and kitchen.

SEAD earned the American Institute of Architects (AIA) Home of the Year Citation Award for 2008 for their work on the home. The home was also part of the 2007 AIA Phoenix Metro Chapter Home Tour. What’s more, the house, with dramatic changes to its façade and landscaping, now warrants neck craning, maybe even some gradual breaking, from drivers on Missouri Avenue.