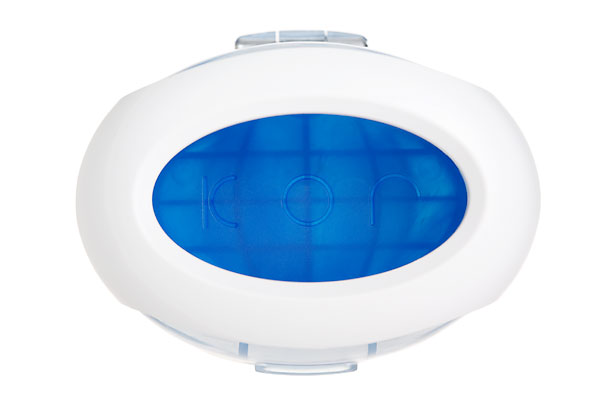 Kor One’s design, driven by RKS Design’s proprietary Psycho Aesthetics® process, has the appearance of blown glass in a protective, rubberized container. Made from East Tritan™ copolyester, a new plastic offers durability and clarity, bisphenol-A (BPA) free. BPA is an organic compound found in some plastic known to be harmful to humans which can leach into the water. Simply put, it looks cool and is made from some excellent materials.

The ergonomic design, coupled with a thumb-release cap and integrated handle, make one-handed operation of the Kor One a simple task. No more fumbling around with caps that are easily lost or take too long to unscrew.

The mouthpiece, which easily fits most ice cubes, is fantastic. It’s smooth, minimizes splashing and makes it really, really tough to pill from–a huge plus for someone not quite coordinated enough to drink without supervision.

The mouthpiece cover with integrated handle is quite a marvel of engineering. Too often do attached caps close without warning, making drinking difficult or uncomfortable, but with Kor One, there are no such worries.

For more on Kor One, check out korwater.

Not All Who Condiment Are Lost