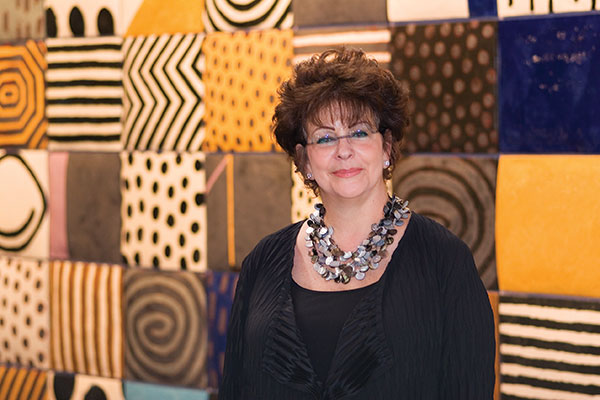 Whether described as on the cutting edge, ahead of their time or just simply as visionaries, our ever-evolving Valley hosts a few brave souls who are casting the mold that will shape the future of our burgeoning megalopolis.

Having been dubbed a forward thinker by us, describe what that means to you?
You take risks. An art gallery is not a business you go into to make a lot of money. Plus, you need an awful lot of space to show art, especially contemporary art. In many cities, dealers look for out of the way locations so that they can afford the space they need and still make the overhead. We were very fortunate to find this place and to be able to work with the excellent bones that it had. We stuck up some walls to divide spaces, but the building was in very good shape structurally. We were the first people down here who would put in this kind of effort and this kind of money into downtown Phoenix.

You had a successful gallery in Old Town Scottsdale. What made you decide to branch out to downtown Phoenix?
We’ve been in Scottsdale for about 18 years. I’ve enjoyed having that gallery, but it is limiting since its size prohibits us from showing bigger sculptures and very large paintings.

Michael Levine owned this building. He and I are friends and he kept saying, “You ought to come down here.” So, I really owe it to Michael. We rented two of the [warehouse] bays from him and then decided to buy the building in 2004. So, we remodeled to our heart’s content and we were very lucky that City Bakery decided to come down and be a pioneer with us.

How has the art scene changed since you’ve been here?
There are some major collections in the Valley that were not here ten years ago. Very sophisticated collectors now live here. There’s a different appreciation for what the museums do, what the galleries do. I know that back in the early 90’s, we could get 1200 people through the Scottsdale gallery on Thursday night because there was nothing else to do. It’s not that these people are art lovers. It was just there. Now you get 200 people. I’m not complaining about it, though, because you get 200 people who are truly interested in art. I think that is a great indicator of how much the city has grown. Galleries are responding by having a much narrower focus on what it is that they are showing. There is now something for everyone here.

Why do you think there has been a surge in the popularity of contemporary art in the Valley?
You can’t pick up a newspaper or magazine without reading about multi-million dollar [contemporary] paintings being sold. Anytime something is that expensive, people pay attention. The unfortunate thing is that end of the market is the only end getting significant attention. It’s really just economics.

What do you say to detractors of contemporary art?
I try not to talk to them. You can’t. If they are so prejudiced against it that they are not willing to open up to an education about why it’s important, you just let it go. Yes, their grandson could have done this, but the point is that he didn’t. There are artists who literally broke the mold and changed the history of art. Look at Damien Hirst. Personally, do I want a bifurcated cow in formaldehyde in my living room? I don’t think so. But he has raised a lot of interesting, controversial and philosophical questions about art and life in our time. Therefore, he is important and his pieces sell for millions of dollars.

Look at Picasso and what was being made in the early part of the 20th century. It started with cubism. It was a huge departure from the norm and everybody was standing in front of his work saying, “This guy is never going to make a living doing this.”

What’s your favorite art installation The Bentley Projects has had the pleasure of showcasing?
That’s a tough one. I guess my favorite would be the first one we ever did – we showcased Jim Dine, Jennifer Bartlett and Julian Schnable. It was just nice to see it all in the renovated warehouse setting after working so hard to get the building up and going. But I think my favorite year of exhibitions will be 2008 because of two big shows. We got Devorah Sperber coming in January and in February we’re turning the space over to Pat Steir for whatever she wants to do with it. When you have a renowned artist with her experience and you give her that kind of square footage – it’s going to be exciting.

What do you see happening in downtown Phoenix in the next five to ten years?
The city is growing faster than it can create legislation.  It’s kind of the tail wagging the dog at the moment. That will slow down. Everyone will catch up with what’s happening. There are going to be people living down here full time and they will be forward thinkers also. Anyone who moves into an area that does not have a grocery store – those people are brave. There’s not even a 7-11 that you can run out to for a quart of milk! On the other hand, having lived in New York, there’s nothing like living in a city.  I look forward to, admittedly years from now, when Phoenix is a real city.