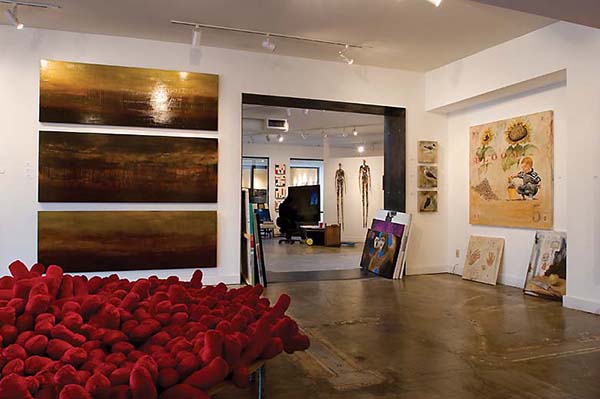 When he woke in the morning, open gallery for art students was scrawled on the chalkboard in his bedroom. “I apparently wrote it sometime during the night,” said Kraig Foote.

Fourteen years later, he does not question that subconscious note to himself as he sits in his Art One Gallery on Marshall Way in Scottsdale.

“The original idea was to help students in schools like ASU, UofA and NAU to get some sales under their belts, get their portfolios together, teach them to market themselves–all the things I found out they weren’t being taught in school so when they graduated, they could start with that,” explained Foote.

Born and raised in Scottsdale, Foote sought a space among the well-trafficked, established galleries in Old Town. “If you’re not with other galleries, people won’t take you seriously,” he said.

An ample loan from the Newlon family, a lease with latitude from the landlord and the trust of an ASU professor who encouraged his students to submit their work helped Art One get off the ground. “I consider myself the luckiest person in the world to have found this particular spot,” Foote stated.

How the gallery was named attests to the meager beginnings of the enterprise. “We did not have money for a sign, so we climbed up and took letters off the building from the previous gallery and played Scrabble,” said Foote, with a laugh. The letters formed ART ONE.

One might assume the neighboring highbrow galleries would snub their noses at Art One’s non-established artists, but everybody wants to help.

“The surrounding galleries have encouraged us so much all these years,” Foote continued. “We are not a threat. The competition helps one another. Fifteen to twenty of our artists have become huge, nationally and internationally.”

Artist Adin de Masi launched his career at Art One. He had known about the gallery since high school and visited throughout college. “I was intrigued by the eclectic nature and energy of this emerging artist stronghold,” he said.

After he graduated from ASU, he approached Foote about a show. “I’d heard of the post graduate lull,” said de Masi. “Without relying on the structure of people giving assignments, art starts to slip away.” At his first show out of college, almost all his pieces sold solidifying his allegiance to Art One.

If there is an overall characteristic that describes Art One clients, it is paternal, according to Foote. “We’ve known some of our clients since we opened,” said Foote. We’ve watched their kids grow up.”

Adding to the success of Art One, a client introduced Vestar Development Company (the developers behind Tempe Marketplace) to Foote in the middle of last year. The introduction led to the opening of a temporary 8,000-squarefoot Art One Gallery at the retail center on Rio Salado Parkway.

“This is a cultural initiative for our community,” said Summer Katzenbach, marketing director for Tempe Marketplace. “We want to make art less intimidating and more approachable. We are passionate about the importance of bringing this to our community. Art One helped us execute our vision.”

Six weeks after the gallery opened in late September ’07, almost 20,000 people had passed through the art space, with almost a third had never been to a gallery, nor a museum.

“If you get people to a mall where they can see real art–not reproduced, mass-produced pieces, but real, true artists–they’ll say ‘Lets go see more,'” Foote added.

Foote says they might plan exhibits of featured artists a month in advance to twenty minutes in advance. To find out what’s going on at the galleries, they update their website on a daily basis.

Some of the work shown at Art One in Scottsdale is produced by high school students, while other work on display at the new Tempe location was created by elementary school children.