Home travel Chicago . . . and all that jazz 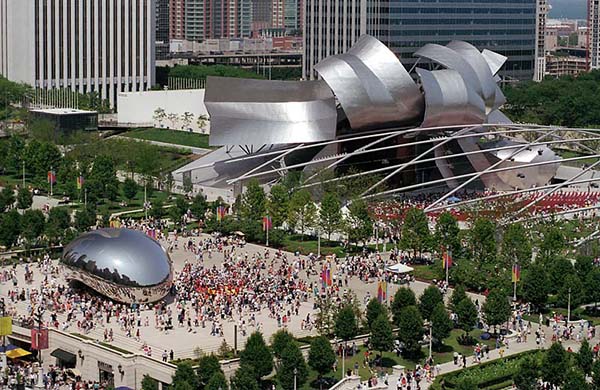 The Windy City. Wrigleyville. Chi-Town. Second City. Whatever the surname, it’s Chicago and it is at the forefront of modern architecture, with its sleek skyscrapers, trendy clubs and four-star posh hotels. Visiting Chicago takes on a different feel depending on the time of year. Near the holidays the city is coated with a soothing blanket of snow and the gorgeous reflection of city lights, while in the summer, music festivals like Lollapalooza and Pitchfork give the city an echoing hip factor that can be heard by the thousands that flock to the beaches of Lake Michigan’s shores. Whatever time of year, Chicago is chock full of exciting places, entertainment and must-see landmarks, so start planning a weekend getaway.

Hotel 71 is the perfect place to drop off your things and cozy up. Located in the Loop conveniently in between the mega shopping epicenter the Magnificent Mile and Millennium Park (home to the Art Institute of Chicago, countless city festivals and some damn fine sightseeing), it is the ideal location to start and end your day. Larger than a boutique, the 71 still boasts an impressive list of finer amenities and hip touches not likely to be found elsewhere in the Loop. The rooms are a colorful mix of soft linens, fine leather and warm, caramel-colored wood fixtures—all overlooking the Chicago River and never-ending skyline. The rooms are big for the heart of the city, all of them at least 380 square feet.

Just a few blocks west sits another hotel option, the Allegro. It’s within walking distance to Chicago’s great highlights, but you may not want to leave the room. Each room features in-room spa treatments, LCD TVs and a chocolate color scheme that suits the city perfectly. Plus, the hotel is attached to two of Chicago’s hottest dining spots, 312 and Encore Liquid Lounge. Try the filet mignon tacos at Encore; they’re an eclectic mix of culinary styles not to be skipped.

Once settled, just step outside. In a flurry of construction, several new buildings are under construction reshaping Chicago’s skyline along side Chicago icons like the Sears Tower, the Smurfit-Stone building and the John Hancock building.

Many new high-rise mixed-use buildings and hotels are either proposed or under construction along the lakeshore and riverfront, including a 92-floor Trump International Tower and a 100-floor Waldorf-Astoria hotel.

Slated for completion next year, Aqua is one of the more unique buildings under construction. Designed by Studio Gang Architects, at its heart it is a standard glass box, but protruding from the exterior are undulating balconies that give the illusion of a surface contoured with ripples or waves. Aqua is a mixed-use building with over 200 hotel rooms and 700 residences.

The dominant feature of Chicago’s future skyline is under construction right off Navy Pier and the Ohio Street beach. It may not look like much, but come winter 2011, the massive circular construction site will be home to the world’s tallest residential building, the Chicago Spire. Dwarfing most of the city’s skyline at 2000 feet, the Chicago Spire is a twisting pinnacle of breathtaking glass and metal. Designed by Spanish architect Santiago Calatrava, the 150-floor structure will be the tallest building in the western world.

No trip to Chicago would be complete without a visit to Millenium Park, a 24.5-acre center for art and architecture. The primary features of the park include the Frank Gehry-designed Jay Pritzker Pavillion, the interactive Crown Fountain by Jaume Plensa and the now iconic Cloud Gate sculpture.

A day of sightseeing in the humid summer or lake-frozen winter will leave a traveler hungry. Take a dab of Chicago’s cultural fusion at Japonais, where Eastern influence clashes with a sushi bar for tantalizing results. Set amongst several rooms with separate atmospheres designed by world-renowned architect Jeffrey Beers, Japonais begs to be discovered several times over.

At Avec Restaurant the mission, like the design, is simple: excellence. Avec looks a little like a large cedarwood shoebox shoved into the ground floor of a historic building. The long bench and box seating are almost severe and create a clean palate to present the Avec concept of dining, community and lifestyle. The food and service are first class and the restaurant offers an extensive selection of wine and cheese. Avec is the place the city’s top chefs and sommeliers eat.

Further north on Rush Street, a stretch synonymous for stellar nightlife, lies Le Passage, both a culinary delight and a European-style discotheque. The menu is on the hearty side, with short rib burgers and fish ‘n chips as mainstays. But the dancehall side has a much different atmosphere. The drinks flow and the music blurts into the night, all set to an edgy atmosphere of smoky grays and muddy browns. Don’t miss the attached Drawing Room, a 55-seat lounge that ups the chic—the atmosphere is pure Chicago out of the 1920s. Old-fashioned drinks are choice in this sitting room. You can practically picture Al Capone and his Chicago Outfit cronies slugging back a few just a few seats over from the bar. Try the Nooner, a blend of Maker’s Mark, Navan Vanilla, maple syrup, freshly grated ginger and orange bitters.

A weekend trip is hardly long enough to pack in all of Chicago’s primo dining, shopping, nightlife, sights and culture. Just wandering the city’s streets and marveling at the blending of atmospheres can steal away a whole day. From the glass and steel monoliths and wide streets of the Loop area, to the tree-lined picturesque sidewalks of the Near North and the so-dirty-it’s-good fun of the neighborhoods to the north of the city, there is much to be seen. So, pick an itinerary, but don’t be afraid to deviate from it a bit—you’ll be glad you did.

The High Line is Set for the Solar Carve Tower by...