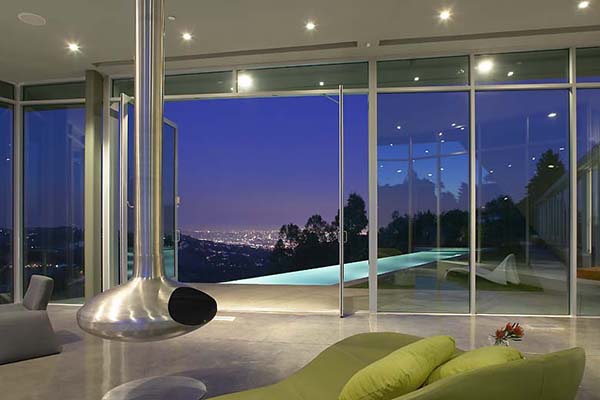 Perched atop a ridgeline in the Hollywood Hills, the Skyline residence is a testament to environmentally sensitive building sans the sacrifice of beauty or budget.

While the increasing popularity of green products and the emerging state of newer green technologies are changing the way architects perceive the substance of each design, cost can be prohibitive, especially for single-family residences. At the same time, some of the most common or basic strategies to incorporate natural solutions are also some of the cheapest.

The home’s spaces and the composition of exterior wall treatments were made to provide protection from direct sunlight, optimum viewing angles and maximum daylight.

The southwest-facing façade is exposed to low, late evening sunlight. On the interior, a single-loaded corridor was created to act as a heat buffer between the glazing and the bedrooms. In addition to deep shadowing eaves, a custom screen made of Extira, a low formaldehyde-emitting composite lumber, was installed. While acting primarily as a shading device, the entire elevation composed of these slightly offset pieces of lumber creates a unique visual texture viewable from the west.

The northeast side of the building is entirely glazed and features dramatic views of downtown Los Angeles, Laurel Canyon and the San Fernando Valley, while offering every room in the house an abundance of north and east light.

The doors also engender feelings of being outside. This feeling is dramatically enhanced through the use of a floating orb fireplace, an infinity-edge view, and a concrete material that extends beyond the threshold to the pool.

The corridor leading to the bedrooms has openings at either end, which facilitate airflow past each room, and openings from each room to the rear yard draw on the cool, moving air from the corridor through the length of the house.

By making use of materials that were on site or in Los Angeles, the architects and builders reduced costs, energy and emissions that come with ordering materials from distant locations.

Despite the convenience of acquiring building materials locally, getting materials up to the site was difficult, said Chris Arntzen, a designer at Belzberg Architects.

While choosing local furniture, fixtures and equipment was an obvious avenue to reduce energy consumption throughout the life of the house, the hidden elements of construction and structure were considered in this design as well.

Due to the severity of slope and the dense granite stone beneath the surface, minimal excavation was necessary. This not only reduced expendable energy in operating machinery, but removed only earth which could be reused in other areas of the project. For instance, the excavated granite was decomposed and reused to level drainpipes, under concrete slabs, as a drainage field under the pool and as a walking surface for the viewing deck above the garage. Decomposed granite is generally an expensive material for such uses, however, the material was free and the shipping of sands and other pulverized materials was minimized.

California-manufactured low-e glazing, steel, CMU blocks and indigenous aggregates support the initiative as well. Wood framing and wood flooring leftovers were acquired from a nearby construction project and put to use in the project. To dress the landscape, low-water consuming plants from a former office of Belzberg’s in the area were transplanted to the site.

While this type of green building is not prevalent, it is a welcome step in the right direction. High-end living, great design and green building will soon become synonymous.