Home interior From Notorious to Infamous to Glamorous 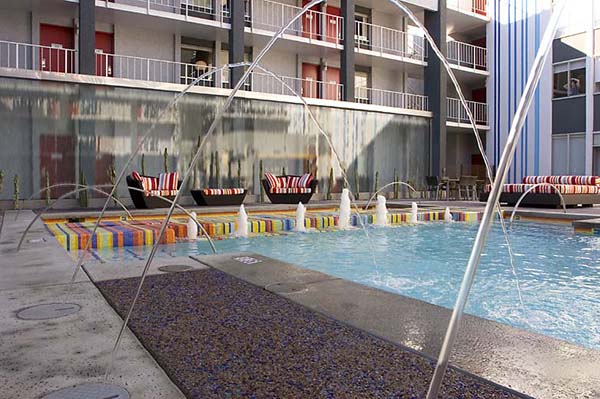 Like any fine monument or trendy celebrity, The Clarendon Hotel in central Phoenix has found numerous ways to reinvent itself throughout the decades. From its swank status in the 1970s, to moving past its notorious murder later that decade into a hip destination in the early 1980s, to chain ownership and escaping low-class clientele, the newly remodeled Clarendon Hotel is now writing its own history as one of Phoenix’s hippest hotels in the 21st century.

Although the new Clarendon Hotel is still very young in age, within the last year it has been recognized as the Best Boutique Hotel in Phoenix from The Travel Channel and as the number-one rated hotel for singles from TripAdvisor.com.

“People fled central Phoenix because they wanted to live in the suburbs,” said hotel owner Ben Bethel. “But now that people are returning to the city, we are proud to be one of the greatest sources of pride for central Phoenix. I love Phoenix and I want others to feel the same, so I remodeled this hotel to be cool and to create a sense of community.”

Bethel, who has spent his entire adult life as an active member in the city’s civic and political scene, bought the hotel with two friends in the summer of 2004. At that time, The Clarendon was known as Callamus, a gay retirement home, hotel and restaurant establishment only two years removed from another infamous identity that led the Drug Enforcement Agency and local police to seize the property for drug trafficking and prostitution in 2002. All of this came in the aftermath of the 1976 car bombing death of journalist Don Bolles, for which the hotel will be forever linked.

“When I first started renovating the hotel I wanted to get everything done at once, but I had to be patient,” said Bethel. “We had to overcome a bad reputation and get people to understand that this is now an excellent hotel.”

Luxury is the key to the remodeled rooms, all of which are adorned with Arizona license plates on the front door to identify room numbers, along with 42-inch flat panel televisions, the same brand of beds that are used by the Ritz Carlton and the Four Seasons and the same brand of linens used at the Royal Palms and Hotel Valley Ho.

The Deluxe Room and the Suite Kings, which are one-bedroom poolside suites, have a city chic design and feel with globe lighting fixtures and geometric patterns on the carpet. The Suite Kings feature large desks in the living room areas, as well. All rooms come with free international calling.

“It is modern, but comfortable with all the amenities you would find in a four-star hotel without paying three times the price,” said Bethel. “We hire only quality people with excellent hearts to deliver top-notch service so our guests can save time and money to eat, shop and play golf.”

The Clarendon’s Executive Rooms are located within an interior corridor that embraces geometric design with a brash mix of purple, red and magenta. The rooms, on the other hand, have a very relaxing feel with light blue and white dominating the color scheme.

“The age of our building lends itself for angular design,” said Bethel.

All rooms come with anti-bacterial and anti-microbial carpet and cleverly placed mobile artwork replaces curtains to cut down on dust and allergies.

Not only does Bethel enjoy the new hotel, but the list of celebrity guests include The Black-Eyed Peas, Bryan Adams, Martina McBride and Digital Underground.

“We have become the secret hotel for celebrities in Phoenix,” said Bethel.

Not to be outdone, the new C4 Restaurant and Bar celebrated its grand reopening in late October. The bar area features an intimate, candle-lit environment with sparkling red countertops. The dining area is uniquely designed with local artwork, Japanese cartoon action figures and three sleek parallel chandeliers to separate guests. The LED lighting system that stands out in C4 can also be found throughout the hotel.

“I wanted C4 to be clean, comfortable and casual with some class,” said Bethel. “We went from a special occasion restaurant to a place that locals can eat at everyday.”

Since Phoenix visitors and residents celebrate the climate’s near-daily sunny skies, the pool renovations at The Clarendon Hotel may be the most utilized part of the remodeling process. Completed in early November, the new pool features laminar jets that shoot water into the pool from the Italian-made poolside furniture and a separate 50-person spa. To create the desired ‘oasis’ atmosphere, a grand glass water wall lines the perimeter of the pool area with the soothing sounds of trickling water straight out of Sedona’s Oak Creek. The spa is designed with an Italian tile mural embedded with special rows of 24-karat gold and platinum streaks, highlighting a rainbow of colors. 5600 lbs of crushed blue glass was used for the concrete acoustic pool.

“Since this is the desert, I wanted to create a complete urban oasis for people to visit,” sais Bethel.

Finally, the Top of the C, the nickname given to the new rooftop facility, has an amazing view of Phoenix’s skyline. New urban-metro furnishings, flooring and lighting have created a new ambiance as Bethel plans to make it one of the city’s hippest outdoor dining spots.

“Phoenix is really starting to get away from its franchise hotel culture to a café and boutique culture and the intimate atmosphere we provide,” said Bethel. “I didn’t want to be safe and boring in the design, so I hope our guest are into the same thing. So far it seems to be working.”