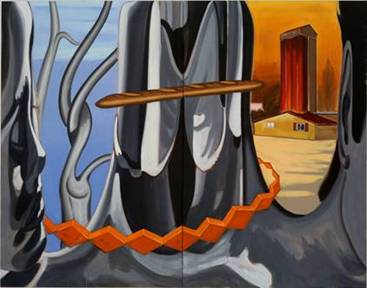 AN APTITUDE FOR METAMORPHOSIS

David Salle will give a highly subjective interpretation of his work –

how it has or has not changed and evolved over the past 25 years.

Everyone is Welcome – Admission is Free

Seating is on a first come first seated basis, so it is suggested that you arrive early to ensure admittance.

David Salle’s work helped define the post-modern sensibility by combining figuration with an extremely varied pictorial language.  Major exhibitions of his work have taken place at the Whitney Museum of American Art and the Los Angeles Museum of Contemporary Art. In 1986, Salle received a Guggenheim fellowship for theater design, and he is a long time collaborator with choreographer Karole Armitage designing sets and costumes for many of her ballets.

Salle was born in Norman, Oklahoma.  He earned a BFA and MFA from the California Institute of the Arts where he studied with John Baldessari.  Salle’s work first came to public attention in New York in the early 1980s.  His paintings comprise what appeared to be randomly juxtaposed images, or images painted on top of each other with deliberately ham-fisted paint handling.  His subject matter tended toward the popular, the gratuitous, and the pornographic and was combined in ways that appeared to be deliberately incomprehensible.  Salle’s work was called “cynical,” “calculating” and even “cold”.  In the late 1980s, Salle and his contemporaries — termed postmodern —  achieved a level of success with their work which at the time was termed succès de scandale.  Artists appearances made possible in part by D.L. Withers Construction Management and the Phoenix Office of Arts & Culture.

This event is generously sponsored by Bentley Gallery/Bentley Projects.