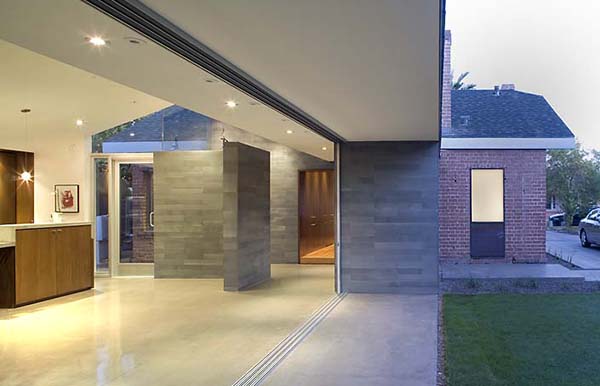 Chris and Becky Nieto’s home is a maverick among its historic counterparts.

From a streetside view the 1924 Craftsman-style bungalow located in Phoenix’s Ashland Place Historic District and the remaining architectural styles of the area—Mission/Spanish Revival and Tudor Revival—appear well-preserved, impervious to change.

But wander to the side entrance of the house and, once inside, you are at the “threshold between old and new,” said Joe Herzog, principal architect of the renovation project. To the right: the original 990-square-foot remodeled home. To the left: an efficient and modern-looking 1400-square-foot addition.

Nieto, the founding principal and CEO of Phoenix-based commercial and residential architecture firm [merz] project—which he employed in the renovation of his home—says the discernable differences between the addition and the original home demonstrate a fresh approach to renovation in the area.

Pointing to an adjacent home, he said, “You can’t tell where the old house ends and the new one begins and that’s what they typically do.”

“We feel this house redefines the way the city of Phoenix can look at historic preservation,” Herzog added.

In the original house, the master bedroom was converted to a guest room, the bathroom was expanded to include part of the hallway and the kitchen was transformed into a laundry room.

Two hidden doors–one leading to the Nieto’s 2-year-old daughter Sofia’s room and the other to the laundry room—blend in seamlessly with adjacent cabinet doors.

Walnut millwork, which is now ubiquitous throughout the home, was added at considerable time and toil.

“There was probably as much time developing the millwork as the conceptual design,” said Herzog of the project, which had a four-month design phase and eight-month build time.

The home was cramped prior to the changes, said Chris’s wife Becky, who specifically complained of the “barely functional” kitchen and bathroom.

In coping with the kitchen’s lack of counter space, “I’d be balancing a pot on my knee trying to open the refrigerator door,” she said. The kitchen was also lacking modern conveniences like a garbage disposal and dishwasher. In the old bathroom, you couldn’t even open the door and sit on the toilet at the same time.”

The addition consists of three areas, or as Herzog conceives of it, “three spaces delineated by masses of stone and wood” housing the living room and kitchen, guest bathroom and master suite.

The living room and open kitchen have the lion’s share of the space. Concrete is used for flooring and the kitchen countertops. Millwork runs along the kitchen area.

Three sliding 8-by-8-foot glass doors that stack in a pocket, along with surrounding blue stone walls that extend outside, break down the boundary between inside and outside.

“Conceptually this is the room and the space outside,” Herzog said.

Becky says some of the inspiration for the area came from Chris’ family.

“This idea spawned off of the idea that Chris’ family all has outdoor kitchens,” she said.

The question became: “How can we incorporate the idea of an outdoor kitchen and not take up all the outdoor space?” she said. “And the compromise was to have an indoor/outdoor kitchen.”

In emotional terms, the area is the heart of the family.

Behind the living room is the master bedroom, which leads into a master bathroom/closet hybrid. For the latter space, millwork spans the east wall, which functions as the closet. At the southwest corner a glass-enclosed shower stall with a concrete bench juts to the outside where it morphs into a mini-infinity pool. In the northwest corner sits a water closet with a frosted glass door.

The ample wardrobe space in the bathroom area frees up the bedroom, eliminating any need for dressers. For project manager Allison Rainey, having clothes in the bathroom seems sensible.

“It seems like the perfect dressing space,” Rainey said. “The bedroom is left for sleeping.”

“We’ve put a bathroom into the closet,” Herzog mused.

Rainey notes that the blue surfaces on the bathroom counter evoke coolness, while the brown millwork gives off a feeling of warmth.

For the exterior of the addition, Herzog said there was an effort to draw on the original gable roofline, while introducing a new material: zinc. Three different profiles of zinc—corrugated and flat panel cladding on the north, south and west elevations with a standing seam roof—capture light differently. Over time a patina will form on the zinc.

“It’s definitely a modern building. It doesn’t look like anything else in the historic district,” Chris said.

While Becky says she has an affinity for the historic aspects of the home, she also loves the modern building.

“To be able to have both is a dream come true,” Becky said. [photos: Matt Winquist]