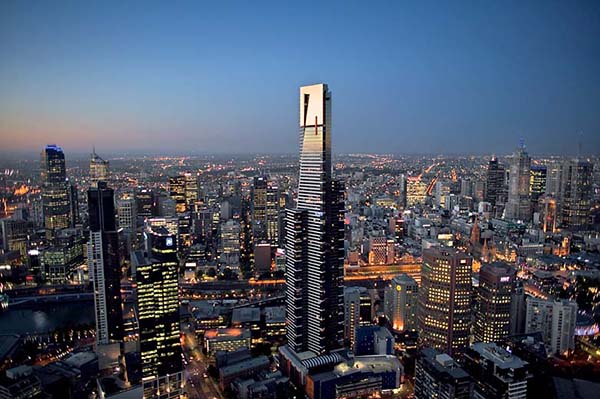 Thanks to a history of progressive planning, a thriving arts scene and a modern building boom, Sydney’s little sister is on the rise to become the nation’s most populous city.

The 88th floor observation deck of Eureka Tower-a 92-story modern masterpiece of engineering and design and the tallest residential structure in the world-is the ideal vantage point to take in your first glimpse of Melbourne. Designed by Fender Katsalidis Architects and completed in 2006, Eureka Tower is what the Jetsons promised the future would be-a self-contained city-within-a-city. With 1500 residences, restaurants and shops, it’s eco-friendly meets luxury living.

The fastest elevator in the world transports visitors to the summit of Eureka Tower in under 40 seconds (John Murphy, observation deck manager, says his ears still pop every time). Eureka Skydeck 88 offers the highest public view of the city and a chance to experience “The Edge”-a thrill ride of sorts that feels like a live version of IMAX. After stepping inside an elevator-like chamber, the doors close and the floor moves 10 feet beyond the building wall, nearly 1000 feet above the earth. Heavy metal music permeates the space and, piece-by-piece, the darkened walls and floor become windows. This is how a bird might see Port Phillip Bay, the Yarra River and a gallery of architectural gems from the city’s beginnings in the mid-1800s to present day.

Beginning in the 1950s, Melbourne city planners began adopting long-term conservation and development policies that focused on a central corridor to consolidate growth and limit sprawl, and incorporating a green wedge concept of conserving slices of open space within the core.

“They were very progressive thinkers,” said Dennis Newcombe, a Phoenix-based Urban Planner at Beus Gilbert PLLC. “These are the same principles many planners are trying to implement in Phoenix right now to curb sprawl.”

This central corridor means everything is just a short walk or tram ride away (the 100-year-old Yarra Tram system is world-class), and every bit of space is maximized. This might explain the unique use of the city’s laneways (the alleys behind the main streets, with names like ACDC Lane) lined with café tables, packed with people, and leading to the entrances of basement pubs, restaurants-like Robot Sushi-and cool cafes.

Fiona Sweetman’s Hidden Secrets Tours is an excellent way to explore the lanes while experiencing the area’s top architectural wonders. Her must-sees include the CH2 building, dubbed Melbourne’s environmental icon, because it was the first in the city to earn the 6-Star rating from the Green Building Council of Australia. The building’s façade is equipped with louvers that track (and block) the sun and a water mining system.

Her other top pick is Federation Square. Spanning an entire city block from the business district to the Yarra River, it was constructed without any right angles. Colorful buildings, comprised of geometric chards of glass and stone, gather around an irregularly shaped piazza. This is home to The Ian Potter Centre “” NGV Australia, housing the National Gallery of Victoria’s collection of Australian Art, and Australian Centre for the Moving Image (ACMI), the largest center dedicated to the art of film in the world. Plus, award-winning eateries, such as Taxi, featuring Australian cuisine with an Asian twist.

“In July 1997, Lab Architecture Studio and Bates Smart were awarded the design contract for Federation Square, and it now stands as an amazing meeting place for the city of Melbourne,” Sweetman said.

Freshwater Place, also a Bates Smart design, is another example of the modern wonders growing up around the Yarra River. Completed in 2005, and incorporating environmentally sustainable design principles, this reed-like, mixed-use structure reaches 673-feet high and is only 82-feet wide (it’s Australia’s thinnest building).

According to tablethotels.com, Adelphi Hotel, from the design firm of Denton Corker Marshall, is “the place architects love to stay.” Its minimalist design is a mix of metals, lightwoods and splashes of color. Its signature design feature is a clear-bottom lap pool that extends over the street below.

Hotel Lindrum, housed in a circa-1900 Romanesque Revival building constructed for a family of tea merchants, is another find. Swaney Draper Architects and designers Terry Fripp and Neil Bradford created a space that feels more like a home than hotel. Modern finishes and warm colors complement the building’s original lines. There’s a professional pool table (from its days as a pool hall) and a pillow menu, which promises the perfect night’s sleep.

Melbourne art spaces are works of art in their own right. The Melbourne Museum, another Denton Corker Marshall creation, resembles a glass and steel airplane ready to take flight. Sloping rooflines draw the eye in all directions, most notably toward the 1880s Royal Exhibition Building-a nod to the historic structure. The 70,000-square-foot museum houses the Aboriginal Cultural Centre, exhibit spaces and an IMAX Theatre.

Completed in 2002, the Australian Center for Contemporary Art, designed by Wood Marsh, is a simple rusted steel shell that takes its cue from the Kunsthalle-German for art gallery mounting temporary exhibits. The interior walls are made of pressed glass and metal as a contrast to the weathered exterior.

Even if you don’t want to go back to school, at least visit The Hub Building at Victorian College of the Arts home to The Centre for Ideas, and designed inside and out by Minifie Nixon. A tapestry of geometric panels in stainless steel and glass create the non-linear exterior shell. Inside, primary colors and open spaces offer a cool gathering place for students.

Melbourne Docklands is a candy store for fans of modern architecture with a green twist. The $4.5 billion development at the edge of the business district is home to 60 restaurants, bars and cafes, and is the perfect marriage of nature and modern design. Towers, mid-rises and restyled historic warehouses mingle with Victoria Harbor, the Yarra River and green spaces.

Opening in 2009, the Melbourne Convention Exhibition Centre (MCEC), designed by NHArchitecture and Woods Bagot, is a $1.4 billion complex along the south shore of the Yarra River. The project was given the 6-Star distinction–the first in the world for a convention center. A 60-foot tall glass wall fronts the triangular structure, allowing waves of natural light to splash into the entry space. The flex-design interior allows the 323,000 square feet of exhibit space to adjust to any need. A glass tube walkway marries the new structure with the existing convention centre.

Melbourne city planners continued a long tradition of ambitious forward thinking by adopting Melbourne 2030 back in 1999, a 30-year plan to continue reducing sprawl by concentrating development to activity centers, while protecting the green wedges throughout the city. To accommodate the expected population explosion, development will continue to rise in a smart, vertical direction.